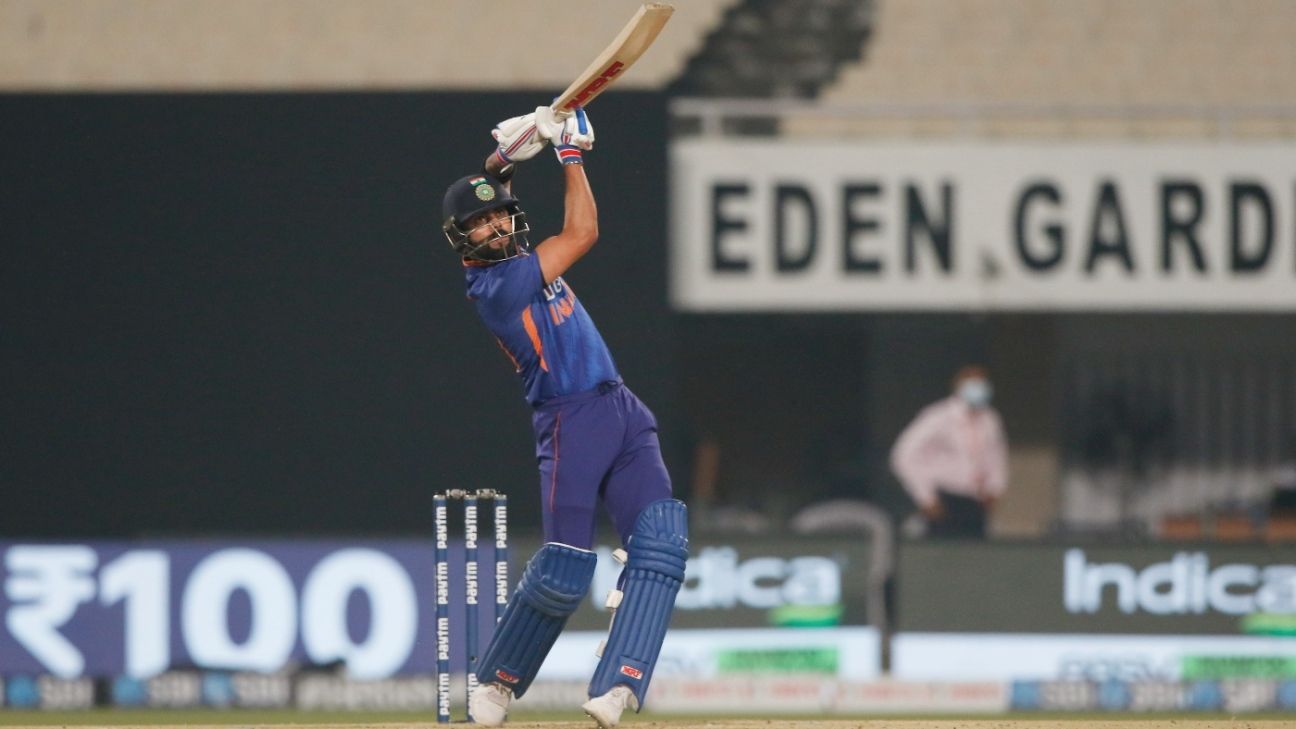 It’s the second over of the innings. The upper tier of the BC Roy Club House roars in unison as the ball hangs high in the air. Kyle Mayers is running back to gobble up a top-edge. At the striker’s end, Ishan Kishan shrieks in frustration. The decibels soar and a collective echo resonates around Eden Gardens. Before they realise it, Virat Kohli is bounding out. Right from the characteristic bat twirl, side jogs to the shadow swing, his typical idiosyncrasies are all in place.

By now, there is a sense of anticipation. The kind you have come to expect every time Kohli walks out to the middle. It felt the same on Wednesday evening. It seems no different on Friday. Anything Kohli has done so far in Kolkata has come under the microscope. Right from him bantering with Rohit Sharma to him giving throw downs to India’s bowlers to him having an extended hit in the nets.

The microscope has been wide enough to encompass things he might not have done too. Prior to the series, a local publication was even ready with a front-page headline saying “Ganguly and Kohli greet each other”, only for their hopes to be dashed when they realised from photographs much later that the person behind the mask talking to Sourav Ganguly – while maintaining social distancing protocols – was Rahul Dravid, and not Kohli.

Much of the talk, right from the ODI series in Ahmedabad, has been around Kohli. Is Kohli his usual self? Is Kohli tired? At what point do Kohli’s lack of runs become a concern? The first time he was asked about it, Rohit offered a polite but firm response.

“We’re not worried at all,” he said with a smile.

After India wrapped up a 3-0 series win, he was asked if Kohli lacked motivation.

Then prior to the T20Is, he was asked once again about Kohli. This time about Kohli’s lean patch and the kind of role a captain and coach should play when a great player goes through a run like this. Rohit let it rip.

“If you guys (media) can keep quiet for a while, everything will fall in place,” Rohit snapped back. “He is in a great mental space. He has been playing international cricket for more than a decade. He knows how to handle pressure.”

Kohli may or may not have been privy to everything said around him, as he walked out to bat. Off his second ball, he invoked awe with his wrist work. A perfectly acceptable length delivery on the stumps from Akeal Hosein was sent screaming trough square leg.

Rohit was reprieved on 2 in the fourth over. His timing seemed off even if his intent spelt boundaries, but Kohli was more than making up for it. In the fifth over, he stepped out and disdainfully slapped Jason Holder over extra cover. And then came the shot of the day, off Romario Shepherd. A thump over mid-on for the cameras. The pose afterwards with the flourish was within minutes being put alongside Sachin Tendulkar’s on social media for comparison.

Not even when Kohli made a mind-boggling 973 runs in a single IPL season in 2016 had he managed six fours in his first 15 deliveries. The last instance of him doing this was way back in 2012, on a tour of Sri Lanka. He was admiring his shots, talking to himself, talking to his partner.

There was a brief slowdown after the early frenzy. A combination of falling wickets and a turning surface was at play, but Kohli knew he needed to try and survive, before once again taking the bowlers on at the death. But he couldn’t resist when he saw a short ball angling into the pitch and a short third man wider than he should have been.

Kohli backed away to the leg side, used the pace and dabbed it past the fielder for a boundary. This was Kohli’s boundary since the powerplay, in the 13th over. The next ball was a juicy half-volley on the pads from Odean Smith. The kinds Kohli would put away 99 times out of a 100.

That was Kohli firing up Kohli. This was Kohli talking to himself, willing himself on, to bat in a refreshingly different manner. “I had decided to stay positive but then we lost a few (Rohit Sharma, Suryakumar Yadav) wickets. I still wanted to keep going but unfortunately I got out ,” Kohli told Star Sports at the mid-innings break. “I was happy with my intent that I wanted to play my shots.

“Sometimes when you play with responsibility over a period of time, you tend to ask (yourself) if you want to play the big shots early. You don’t want to be reckless but at the same time you want to play your shots. That is the balance you strive for.”

For much of his stay at the crease, this balance was there, along with some luck, too. The shot he hit to bring up his fifty – a lofted hit over long-on – needed the tallest man in the field to have him. Jason Holder was lurking, yet could only palm the ball over the ropes. Kohli raised his bat, Eden roared, just like they did as he strode to the middle.

One legitimate delivery later, he was gone. They roared again. This time to applaud a different Kohli innings from the one they’ve been seeing. This was Kohli who had batted like the Kohli of old, without the pressure of having to hold a crumbling fort, but with the freshness and freedom India would hope to see a lot more of going forward.