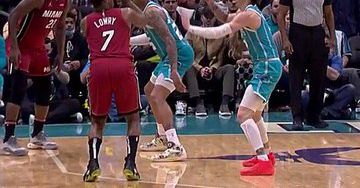 It’s safe to say the Charlotte Hornets are really, really bad when it comes to overtime. The young team is now 0-6 in overtime, worst in the NBA — but on Thursday night, it wasn’t really their fault.

The Hornets pushed the Heat to the limit, shutting down Jimmy Butler and jumping out to a huge second half lead. They saw it whittled away in the fourth quarter, but still appeared to be doing enough to beat one of the East’s top teams. LaMelo Ball was cooking, on pace for a triple double, with Miles Bridges continuing to assert his superstar credentials. Then in overtime, this happened.

Kyle Lowry hit a “three” with 2:02 left in the first overtime. It was clear to everyone that Lowry’s foot wasn’t just on the line, it was half over it. There was absolutely no way this should have been given three points, but Charlotte inbounded the ball, removing the chance for a replay and the referees didn’t have any doubt they made the right call.

They should have had some doubt on behalf of officials, because everyone else knew they messed up.

The first overtime ended tied at 97-97. If Lowry’s shot was called correctly, the Heat would have lost by one. Instead the game went to another overtime period, Ball fouled out, and as soon as that occurred it was clear the game was over.

The Heat went on to win 111-107, and the Hornets now find themselves at 9th in the East, languishing in the middle of a 1-9 stretch over their last 10 games that is collapsing their season. Meanwhile, Miami is now tied with the Bulls for first place in the East entering the All Star break, when a loss would have put them in second.

If this ends up being a difference maker between the Hornets making the playoffs and falling out again, then my goodness is this game going to be even more controversial.