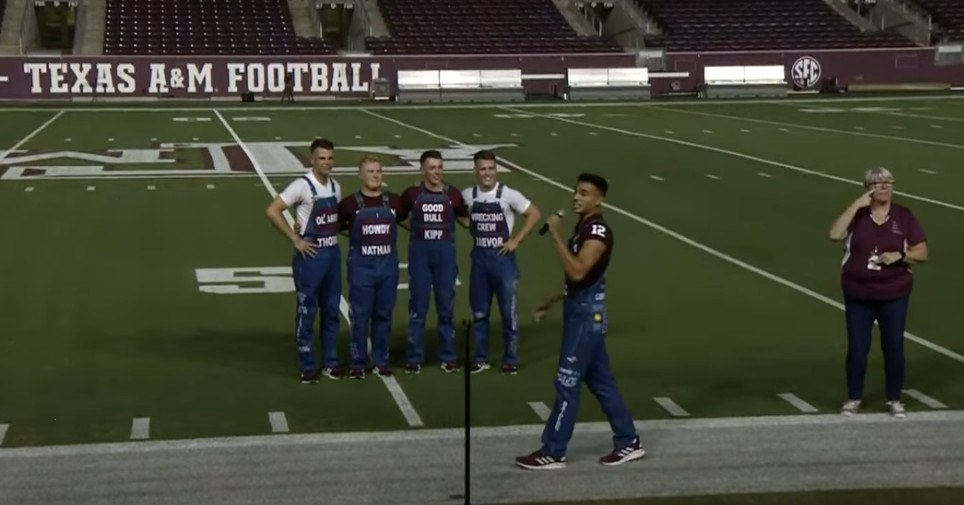 Texas A&M’s “Midnight Yell” practice is, without question, one of college football’s saddest traditions. I have no functional problem with the concept of a midnight pep rally, even if it’s something a high school should do — and not a top-flight college program, it’s more how they love punching down using a cast of characters devoid of personality.

On Friday night it was time for the Aggies to take a shot at Appalachian State, and hoo boy if you need some schadenfreude in your life you’re going to enjoy this.

Trying to do standup is difficult, even if you’re a funny person. There is such a difference between making casual jokes at a party to entertain your friends, and standing in front of a crowd to deliver lines which require poise, timing and feeding off the energy of a crowd to understand what works, and what doesn’t.

The “Midnight Yell” routines are so horrendously bad it’s almost like A&M hold auditions to put the least-funny people on campus on the field for this thing. Hell, if that was its stated mandate it would quickly become the best tradition in CFB, but that requires self awareness the school is incapable of.

So, obviously the elephant on Kyle Field is making fun of Appalachian State. A small, Sunbelt school nestled in the mountains of North Carolina, who just so happens to carry a switchblade in its overalls to cut the hearts out of big FBS schools who dare to try them. It happened to Michigan in 2007, now it’s happened to Texas A&M, who lost to the Mountaineers 17-14.

I thought it prudent to break down some of the “jabs” taken at App during “Midnight Yell.”

“I had to Google this team to make sure they’re even real.”

Well, if you had Googled App State football you might have known their propensity for killing the dreams of big schools. Also, that they’ve won three FCS titles in the last 20 years — which is three more titles than the Aggies have won in the same span.

“Sure enough, I found them, deep, and I mean deep in the backwoods.”

Boone, NC is 100 miles from Charlotte.

“Just like you’d think any hillbilly college that names themselves “The Mountaineers.”

Sir, you are literally wearing overalls while reciting this and your school is literally named for farming.

“It’s a shame the only two brain cells that all these guys have left are getting knocked out by our wrecking crew defense.”

I hope the Aggies had fun at the Midnight Yell practice though. It was probably a lot more fun than the game on Saturday.