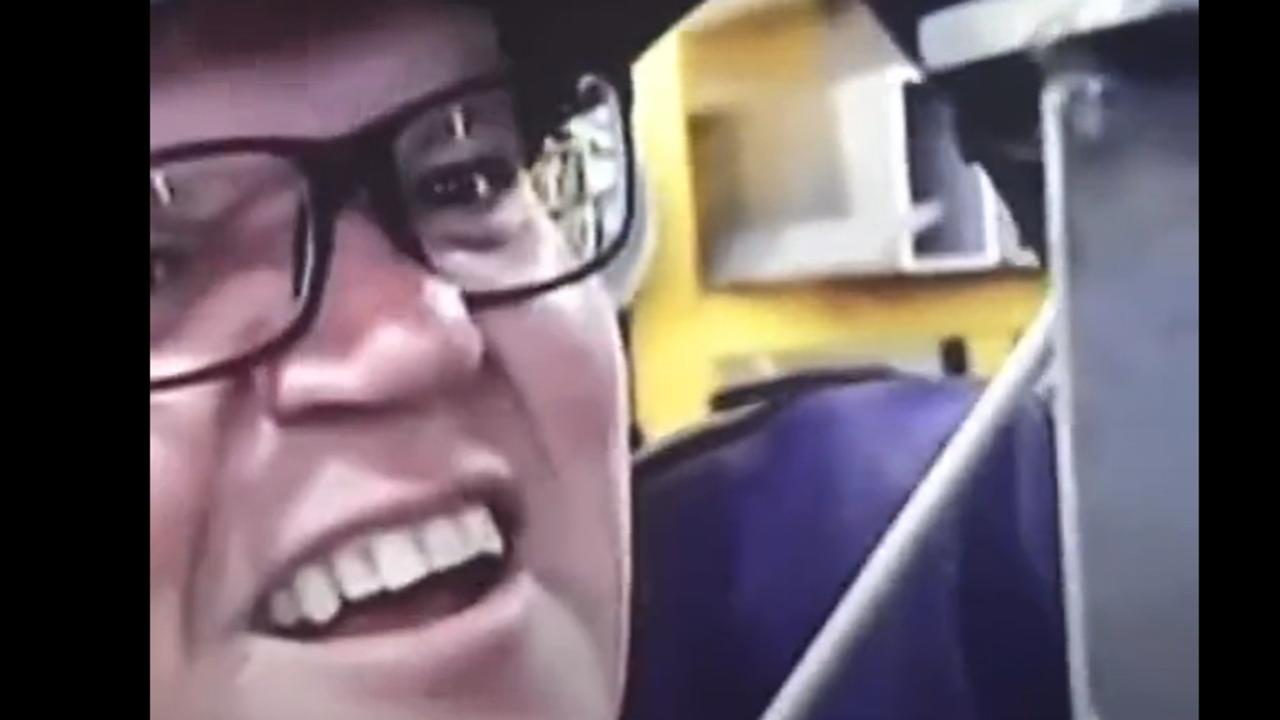 Scott Morrison has been trashed for a bizarre welding error with some describing the Prime Minister’s antics as “embarrassing”.

A clip of Prime Minister Scott Morrison “on the tools again” has embarrassed tradies across Australia.

Mr Morrison was at SWEL Specialised Welding and Engineering on Friday to announce a $21.9 million Indigenous Leadership and Governance package as part of a trip to the Northern Territory.

It was during this he was captured, by Channel Seven News, having a crack at welding, but instead of keeping his protective helmet over his face while undertaking the dangerous activity, he pulled his mask up at the worst possible moment.

The PM said he was “on the tools again” as he grabbed the welder and approached the piece of steel.

But after peering out from under his helmet to get a better look, he was forced to quickly retreat as sparks flew.

Sally McManus, the secretary of the Australian council of trade union, shared the clip on Twitter — where Mr Morrison was roasted.

Some even compared him to former United States President Donald Trump, who was captured staring at an eclipse without protective eyewear while standing on a White House balcony in 2017.

One Twitter user commented: “Every TAFE welding course and health insurance company should show that clip as a warning on how you get permanent eye damage if you try to weld without proper training”.

Another described the whole episode as “embarrassing and inappropriate”.

Others simply said “no words”.

Comedian H.G Nelson wrote, “PR campaign is shaping up nicely. It was a master stroke having the number 1 swerve around big issues by demonstrating his wild, hats off welding technique.”

Eye surgeon Dr Daya Sharma reminded Aussies that “the eyes must be shielded when around welding.

“A momentary flash can cause UV photokeratitis hours later (a form of corneal injury); it is extremely painful.

“Sometimes people around the welder are injured from momentary exposure,” he wrote on Twitter.

A clip of the incident was trending on the front page of Reddit, with more than 17,000 upvotes.

“Don’t do this at home kiddies,” one person wrote.

“Not the greatest image portrayed of our prime minister.. I guess you could say it’s a bad look,” another quipped.

The video prompted people to tell their own welding horror stories.

One Redditor, a welder by trade, wrote: “Doing what he did will make your eyes feel like sandpaper.”

It’s not the only criticism Mr Morrison has copped this week, with a local NT reporter grilling him about the crime situation in Alice Springs and authorities saying residents are living in fear.

The PM has also been described as desperate and was accused of politicising national security, after he claimed Labor leader Anthony Albanese was China’s pick for Australia’s top job.

The package announced by the PM is expected to support thousands of Indigenous individuals.

The package includes $13.5 million for the Australian Indigenous Mentoring Experience to support young Indigenous Australians to undertake leadership roles and $6.7 million for Office of the Registrar of Indigenous Corporations to develop governance training materials.

There was also $1.7 million put aside for the National Indigenous Australians Agency to provide scholarships

“Our $13.5 million investment in the Australian Indigenous Mentoring Experience program will extend this successful program by three years to 2025 and expand its support to 10,000 students a year, up from the current 6,000 students a year,” the Prime Minister said in a statement.

“This will ensure even more young Indigenous Australians can realise their leadership potential and career dreams through this proven mentoring and skills development program, and become the next generation of leaders in business, community and the public sector.

“In addition, Indigenous businesses will be strengthened with a $6.7 million investment in governance, and we are providing $1.7 million to deliver scholarships for Indigenous Australians to undertake company director courses to provide Aboriginal and Torres Strait Islander people with the skills to take their business to the next level or sit on the boards of our top companies.”