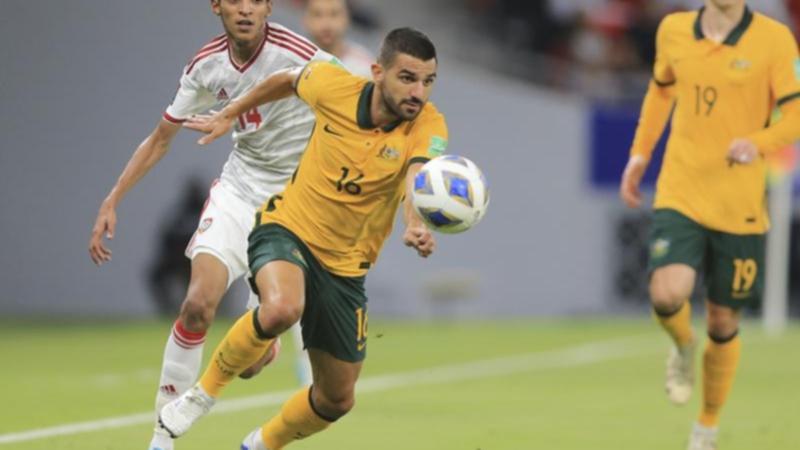 As the Socceroos begin preparations for arguably their biggest game since the 2005 play-off against Uruguay, fullback Aziz Behich has rejected the suggestion Australia had lost any belief that they could reach this year’s World Cup.

The Socceroos face Peru in Qatar on Monday (Tuesday AEST) in an inter-continental play-off with the winner sealing a spot at November’s finals.

Australia reached that match with a 2-1 win over the United Arab Emirates in an Asian play-off on Tuesday (Wednesday AEST), just their second win from their past eight qualifiers.

Having seemingly been on track to qualify automatically following a record 11-game winning run, the Socceroos’ campaign stalled after a 2-1 loss to Japan in Saitama where Behich was the unfortunate soul to concede a late own goal that handed the Samurai Blue victory.

Despite that dispiriting run, Behich said belief inside the squad had never wavered and they’ll head into the clash with the world No.22-ranked Peruvians confident they can cause an upset.

“Obviously, the campaign didn’t go the way we wanted but it’s not the first time we’ve had our backs against the wall.

“We did it last campaign as well and we’ve got belief going in against Peru.”

Behich is one of six players in the current squad who played the South Americans at the 2018 World Cup.

Backed by a large travelling contingent of supporters keen to experience their first appearance at a World Cup since 1982, goals from Andre Carillo and Paolo Guerrero sealed a 2-0 win for Peru over the Socceroos.

Carillo and Italian-born striker Gianluca Lapadula loom as the main threats for Australia but Behich says the Socceroos showed in their win over the UAE a never-say-die attitude that led to Ajdin Hrustic’s late winner.

“They’re a good side but we’ve just got to focus on ourselves,” Behich said.

“The staff will analyse it for us, give us all the detail, but at the end of the day, we’re the ones on the pitch.

“We’ve got to show that fight we showed (on Tuesday) until the end and give everything we have to make sure that we’re at the next World Cup.”

After enjoying a day off on Wednesday, the Socceroos will get back into training in Doha on Thursday with all eyes on defender Trent Sainsbury (knee) and forward Adam Taggart (thigh), who missed the UAE clash.

Sainsbury’s absence allowed Kye Rowles to make his first competitive start for Australia and Behich says the 23-year-old is indicative of a new generation of Socceroos, including talents such as Marco Tilio and Denis Genreau, who’ve emerged during the campaign.

“All these young boys coming in … they’ve been brilliant,” Behich said.

“It’s given us a lot of energy, fresh faces.

“Everyone’s going to be needed. We don’t know what’s going to happen within these next five days.

“Everyone’s needed in this campaign. We’ve got to stick together and make sure we get the job done.”