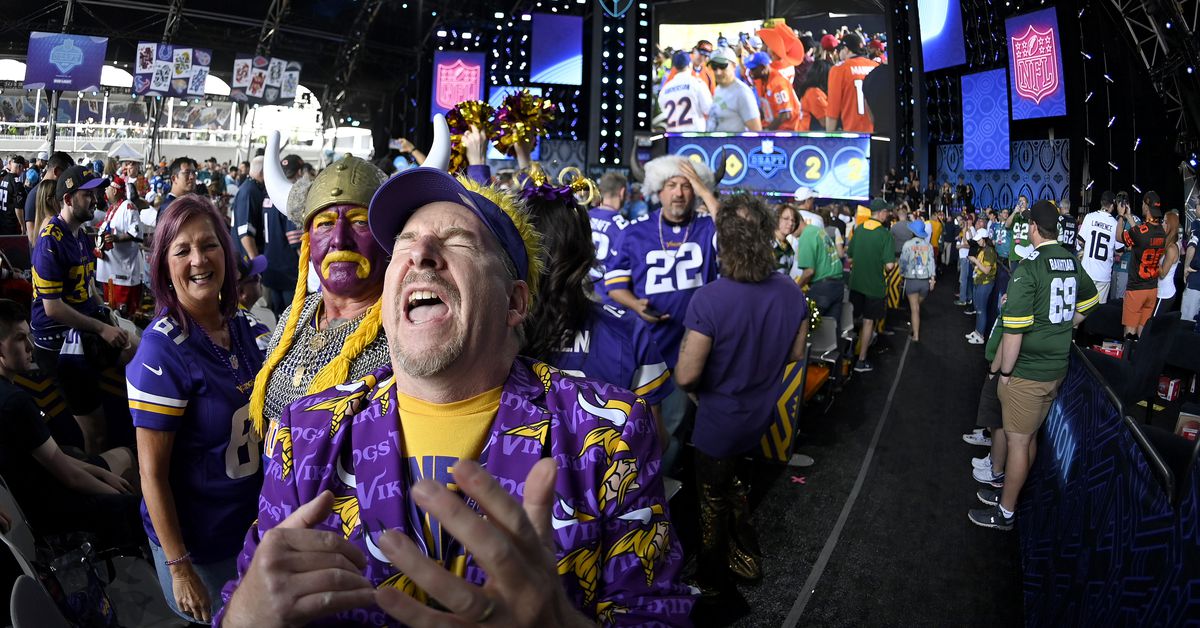 It takes an impressive amount of skill to pull off a trade that bad. That’s the feeling I’m left with after sleeping on the Vikings nonsensical decision to move back 20 places in the NFL Draft and get almost nothing in return. With nine trades in the first round it’s easy for what Minnesota did to get lost in the shuffle, but there is absolutely no decent justification that can be made for what this team did.

Let’s set the scene: Garrett Wilson comes off the board at No. 10 to the Jets, signifying that the run on wide receivers was about to begin. This was always going to be the pivot point, and most people agreed that after Drake London and Wilson there were really two top-tier receivers worthy of a high pick, Chris Olave and Jameson Williams. The Saints don’t want to risk waiting, so they move up from 16 to 11, giving up the 16th overall pick, the 98th and the 120th, and they take Olave.

The Vikings are on the clock. Based on Washington’s return this isn’t going to be a year where teams are willing to give up the farm to move up. In 2021, the Giants received the 20th, 164th, a 2022 1st and 2022 4th to allow Chicago to move up nine spots and take Justin Fields. So, while that kind of deal is an unattainable pipe dream, you can still pick up some mid-to-late round picks by dropping back a little, and that’s okay in a deep draft like this one.

Then the trade is announced … and it makes no sense. Minnesota drops from No. 12, all the way to No. 32. A 20 spot drop is a precipitous fall, one that drastically alters player expectation from guaranteed starter, to boom-or-bust prospects. In exchange they get almost nothing. Seriously. This is the exact trade as it played out.

Essentially the Vikings moved down 20 spots in the first round, so they could move up 12 spots in the second round — and got a high third for their trouble. Now, that high third could be nice and there might be a lot of good players on the board, but nothing excuses dropping that far in the first round. Why Minnesota had to give up their No. 46 in this deal defies belief, and the Lions absolutely fleeced a division rival, netting Jameson Williams for their trouble, who will now terrorize the Vikings for the next five years.

There are a lot of different mathematical models teams use to calculate draft pick value. The classic is the Jimmy Johnson, which assigns each pick a numerical value. In recent years new models have emerged that take into account things like salary value, positional value, and the strength of a draft. Across four major models there are two that show the Vikings actually won this trade … somehow.

However, even the models that show the Vikings winning note that their net gain was only tantamount to a late fourth round selection. The two losing models show Minnesota losing by the equivalent of an early and late third round pick, respectively.

If you’re attempting to justify this trade based off these two winning models and desperately trying to believe this trade was a good thing for Minnesota it’s time to stop being delusional. This was atrocious.

For what it’s worth, I actually don’t hate the player the Vikings ended up with. Lewis Cine is a hard-hitting, no-nonsense safety who can play a hybrid role on defense. He allows Minnesota to put him in the nickel, can bring pressure as a joker pass rusher, and potentially even allow the team to put out some three safety looks, which is growing in popularity around the NFL.

The issue I have is that Minnesota lost control of the draft by moving back 20 spots. I personally cannot fathom passing on Kyle Hamilton if this team wanted a safety, but obviously they felt differently. Even still, if we assume the Vikings were high on Lewis Cine and he was their player of choice at the position, why not take the best player available at No. 12 (Jordan Davis would have been a great pickup), and then look to trade back into the first round to get Cine? All it took from the Jaguars to move from No. 33 to No. 27 was a 4th and 6th round pick.

A lot not hinges on the 34th and 66th picks. The saving grace is that a lot of talent is still on the board, and Minnesota could salvage this if things go right. That’s the problem though. The Vikings now need to work to correct their own terrible trade, when there were so many better paths of action. This was a mess.