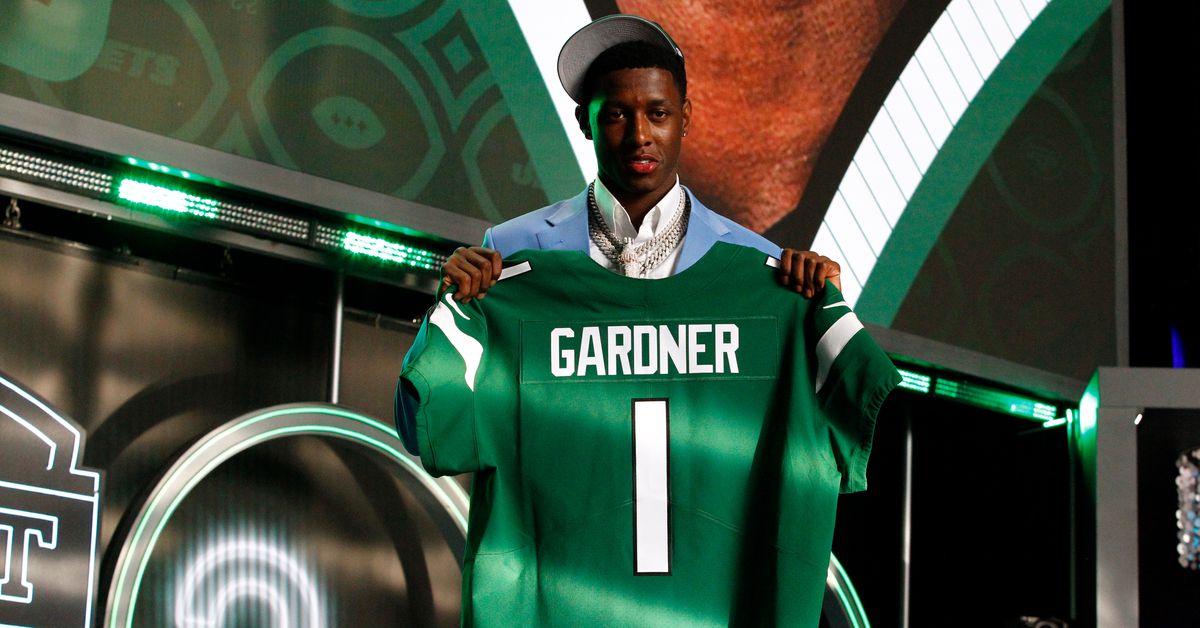 This was never going to be a normal NFL Draft, but I don’t think anyone was prepared for what unfolded on Thursday night. The lack of consensus top players, paired with salary cap concerns with wide receivers turned the night into a trade-filled free-for-all with teams dancing around to either pick up players, move down, or even jettison veterans.

When the dust settled we had some very clear winners from the first round of the draft, who grabbed incredible talent at their draft spot, or danced around to board to maximize value and still land great players. Then you had … well, the Packers and the Vikings.

I was incredibly critical of the Jets’ decision to take Zach Wilson a year ago, but this year the team absolutely killed the first round. New York entered with needs for top end talent at a variety of positions, and left with three players who could have all gone in the Top 10 of the draft — and all at positions of need.

It all starts with Sauce Gardner, who I think is the best cornerback in this class. He was the best fit for the Jets schematically, and I think he’s going to be a ton of fun to watch in the AFC East. Sauce isn’t afraid to attack the ball in the air, or use his large frame to chase down runners. To this end he’s going to be a nightmare for opposing wide receivers, and an effective player to mitigate Josh Allen’s legs.

Following up with Garrett Wilson felt like an obvious choice. Wilson had long been linked to New York, and he’s the ideal do-everything receiver the team (and more importantly Zach Wilson) needs. By virtue of his hands, body control, and willingness to fight for the ball in the air, Garrett Wilson will make Zach look better and catch a lot of passes.

Then came my favorite move of the night, having the aggression to move up in the back-end of the first round to take a sliding Jermaine Johnson II. I’m not sure why the ACC Defensive Player of the Year fell like that, but he was tremendous value. New York needed pass rush help as well, and were linked to Kayvon Thibodeaux at the No. 4 spot. Instead they were able to pick up Johnson with the 26th, and didn’t need to give up the world to jump up.

All in all it was an incredible night for the Jets, and this was their best draft in years.

Green Bay had draft capital they could have used to move around with, and a lot of solid talent on the board. They ended up with two fringe defensive starters, neither of whom will be impact players.

Sure, the Packers had no control over the wide receiver run, or teams jumping up for the talent at the position, I get that, but the Cardinals were able to get Marquise Brown for the No. 23 pick. The Eagles nabbed A.J. Brown for the 18th. With veteran receivers moving around it’s wild that the Packers weren’t in on any of these talks.

There’s an argument to be made that this is all part of a five year plan, but this team needs a one year plan too — especially when you extended Aaron Rodgers for the money he made.

What in the actual hell was that?

When the news first came down that the Vikings were trading down, I understood. Two receivers had just been taken, the top cornerbacks were off the board, and obviously Minnesota wasn’t as enamored with Kyle Hamilton as I thought they should have been. The frenzy to get Jameson Williams was going to be real, so I figured they got something good in return.

Typically you expect a team to “win” a pick trade by 17-20 percent for a first round deal by value. That’s the cost of doing business. THE VIKINGS LOST THIS TRADE BY 13 PERCENT! THEY ALSO LOST IT TO A TEAM IN THEIR OWN DIVISION!

I am flabbergasted by how bad this deal was, and no pick with the No. 34 can rectify it. Minnesota ended up taking safety Lewis Cine 32nd. He’s a good player who decided is not Kyle Hamilton, a much better safety that they could have taken.

I hated this night from the Vikings. What a mess.

I know there’s a lot of angst in trading away Hollywood Brown, but my God did the Ravens pull off a first round heist. Nobody maximized their picks and played the draft like a fiddle the way Baltimore did, who came away with two top players, despite selecting at 14 and 25.

Kyle Hamilton is a Top 5 talent who fell because of his 40 time at the combine. He plays faster than he runs, and has amazing football instincts. He’s going to be a great player for a long time in the secondary.

Tyler Linderbaum is a beast in the middle and will be a 10 year staple in the middle who will make a lot of Pro Bowls. I also think this is a forward-thinking move, as we see more athletic defensive tackles enter the NFL we’re going to see more emphasis on top centers.

There are some big questions about who Lamar Jackson is going to be throwing the football to, but the players the Ravens got are just too good to pass up.

I’m not talking about Derek Stingley Jr. at No. 3 here. He might not have been my choice, but I certainly understand the appeal.

The issue I have is that Houston got way too cute with their second first round pick, which came from the Deshaun Watson trade. It would have been simple for the Texans to stay at 13, take Kyle Hamilton or Jordan Davis, and immediately be a winner. Instead they dropped back, picking up some largely meaningless day three picks, and then reached to take offensive guard Kenyon Green.

This team needed top-tier, impact-worthy talent. Not more picks to carpet bomb the draft with. I think this was a misstep, and time will show the players this team missed out on because of it.

Both New York teams killed it. Look, it would have been kind of difficult to screw up with the No. 5 and No. 7 picks, but they made very sound decisions overall.

Personally, I would have taken Ikem Ekwonu at No. 5 and Kayvon Thibodeaux at No. 7, but this is a minor quibble. I could see a scenario where the Panthers trade out of No. 6 to a team wanting Thibodeaux, and the Giants are let in the wind.

Overall these two linemen will be long-term staples of the Giants, and I love how this played out.

Someone is going to get an absolute steal, and I’m sure the Buccaneers’ phone is ringing a lot between now and the start of the second round.

Willis is the No. 1 quarterback in this class, even if it’s a weak one. The Steelers decided to take Kenny Pickett over him, which is a mistake — but it’s their mistake. Then Willis was forced to sit in the green room all night and be the forlorn player left without a team.

Then NFL Network called his grandma his mom.

The saving grace is that with all the trade backs it increases Willis’ chance of landing on a really good team.