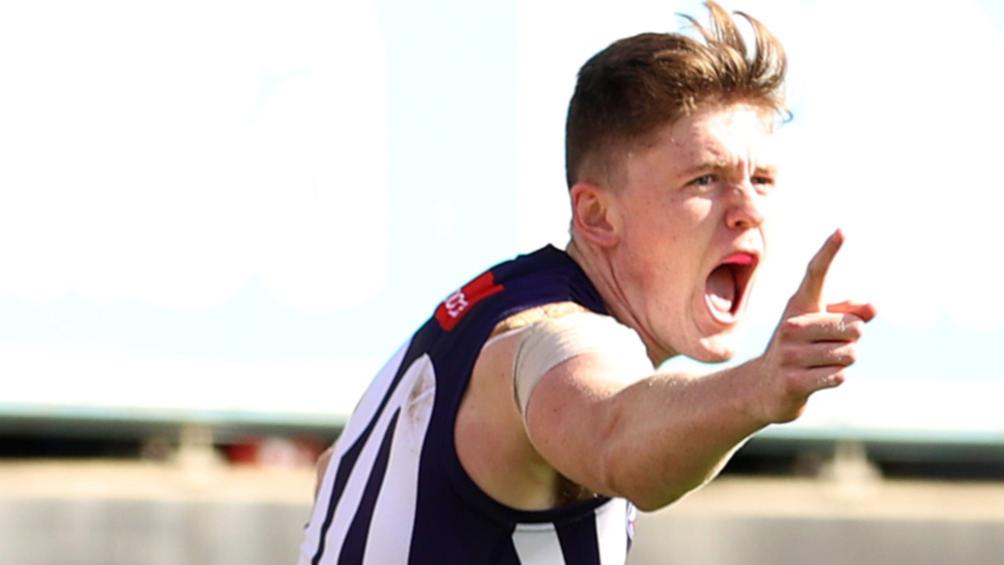 Fremantle youngster Nathan O’Driscoll has kicked a stunning goal on the run to arrest momentum in the first quarter of their clash against Geelong — remarkably similar to his first ever goal in purple.

The left-footer was running tight to the line when he spotted an almost open goal-square and unleashed a mighty drop punt, which sailed through with some defensive help from teammate Josh Treacy.

It was a much-needed goal which left the Dockers in the hunt at quarter-time, trailing 5.0 (30) to 3.3 (21) after conceding the first four of the first five major.

It was the Dockers’ second goal of the day and came from just their fourth inside 50.

At the other end, Geelong’s dominant forward duo of Tom Hawkins and Jeremy Cameron looked like taking the game away from the visitors, with Coleman Medal leader Hawkins kicking two goals and out-muscling Alex Pearce.

O’Driscoll’s goal bares striking similarities with another left-foot drop punt which came on his debut in round two against St Kilda.

Rory Lobb kicked the visitors’ other goal of the quarter after a taking a strong mark inside 50.

Last week, Dockers teammate Blake Acres was nominated for Goal of the Year for his mind-boggling snap from deep in the pocket against Carlton.

Geelong forward Max Holmes has been subbed out of the game, replaced by Luke Dalhaus, with an ankle injury.