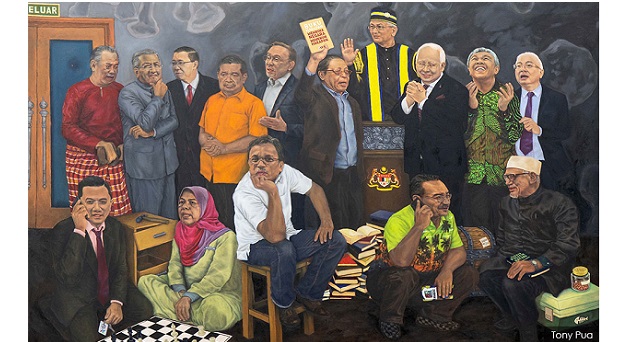 DAP’s Tony Pua talks about his first love, painting There have been a lot of reports regarding Damansara MP Tony Pua’s “Langkah Sheraton” painting. In an interview with Malaysiakini, the lawmaker said that he was selling the painting, not copies of the painting. There are 8,888 digital tokens or non-fungible tokens (NFTs) that were sold or minted within 28 hours of the painting being launched on Merdeka Day. DAP raised RM1.3 million for the 15th general election through the digital sale of the “Langkah Sheraton” painting. “Langkah Sheraton” is a 121cm by 152cm oil artwork, drawn on canvas painting. Pua said it took about 10 months to do the painting. Langkah Sheraton artwork “I started on the painting when MCO 1 (movement control order) started on March 18, 2020. “Then that ended, I stopped and went out to carry out other activities. When MCO 2 started, I went back to my painting,” the DAP MP said. He said it took so long because he was rusty and also because he had his full-time job taking care of his constituency. Based on this much-talked-about painting, it was pretty obvious that Pua is a talented artist. Also, this is not his first artistic […]