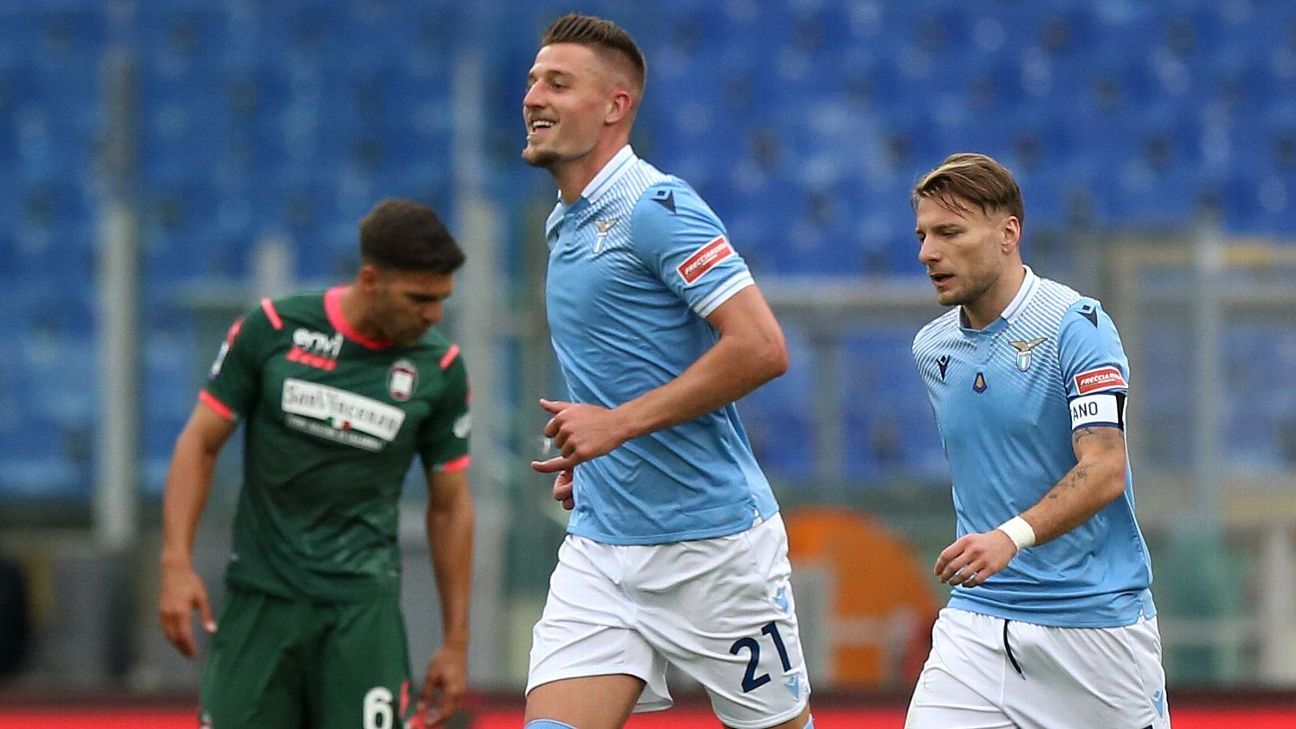 The 2022 January transfer window is closed, but there’s still plenty of gossip swirling about who’s moving where. Transfer Talk brings you all the latest buzz on rumours, comings and goings and, of course, done deals!

Manchester United, Paris Saint-Germain, and Juventus are all interested in Lazio midfielder Sergej Milinkovic-Savic, according to Calciomercato.

The Serie A side value the 26-year-old at €80 million, with the Serbia international impressing but reportedly wanting to move on as his deal runs until 2024.

For Manchester United, the move could be viewed as a potential replacement for Paul Pogba, who is set to leave the club himself in the summer. The Frenchman is out of contract in the summer could leave as a free agent. Milinkovic-Savic is viewed as a player in a similar mold, able to make the runs of an attacking midfielder while having the stature to play more defensively when required.

PSG have often changed their midfielders this season, playing each of Ander Herrera, Georginio Wijnaldum, Marco Verratti, Leandro Paredes, Danilo Pereira and Idrissa Gueye. There are reports that they could look to move some of those players on, with Milinkovic-Savic able to fill in.

As for Juventus, the January window saw them invest heavily, signing both Dusan Vlahovic and Denis Zakaria. Zakaria, who signed from Borussia Monchengladbach, was the first midfield signing in an overhaul reportedly planned by Juve manager Massimiliano Allegri. However, with Milinkovic-Savic on the radar, there could be more reinforcements to come.

– West Ham United are interested in Rangers‘ Calvin Bassey, says Football Insider. The 22-year-old, who can play both left-back and centre-back, is said to be on the Hammers’ radar for the summer as part of their search for a new left-footed defender.

– Chelsea are not willing to make a new contract offer to defender Andreas Christensen, according to Ekrem Konur. The 25-year-old is out-of-contract at Stamford Bridge in the summer, with the report claiming that Barcelona are currently in advanced talks with the centre-back over a free transfer in the summer.

– Juventus are eyeing a move for AS Roma forward Nicolo Zaniolo, reports Calciomercato. The 22-year-old’s deal expires in 2024, though there are talks of an extension that could put an end to the transfer links. Though should he not extend, the Bianconeri are interested in making a move in the summer.

– Manchester City are monitoring a move for Boca Juniors duo Exequiel Zeballos and Valentín Barco, reports Ekrem Konur. Zeballos, 19, is a versatile forward that has become a first-team regular since making the step up from the academy in 2020. Barco, 17, is a left-back that made the jump to senior football in 2021, with a deal that runs until 2023.

– Internazionale could move on defender Stefan de Vrij in the summer, reports Tuttosport. The 30-year-old’s current deal expires in 2023, with plans to extend the contract beyond that point. However, with only one-year left on it in the summer, if an agreement cannot be reached then the Nerazzuri could move him on. Matthias Ginter (Borussia Monchengladbach), Bremer (Torino), and Luiz Felipe (Lazio) are all being considered as potential replacements. Another candidate, Zinho Vanheusden, is on loan at Genoa.