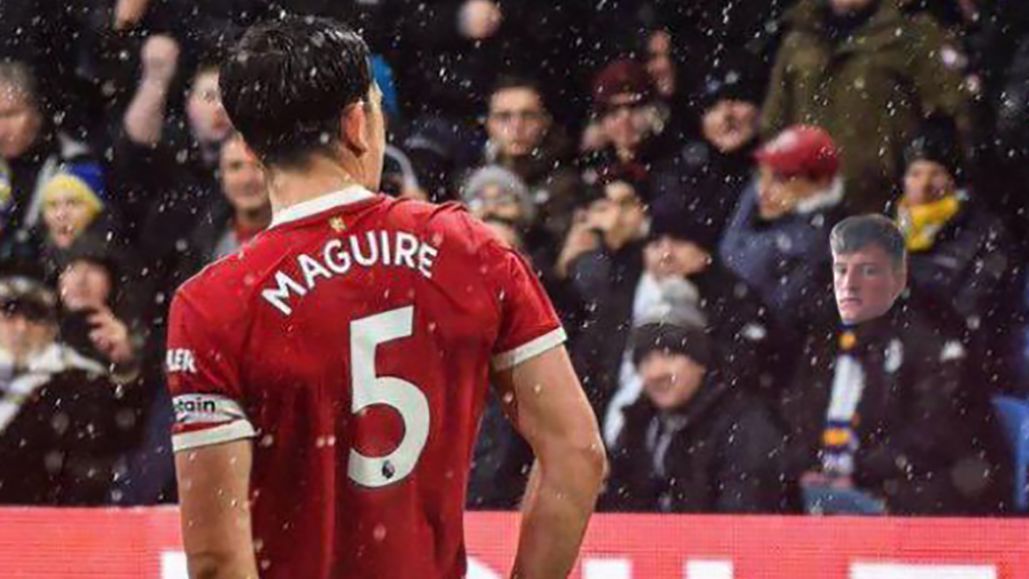 Manchester United battled their way to a 4-2 victory in a thrilling Premier League slobberknocker against bitter rivals Leeds United on Sunday, though they were forced to weather the storm — both literally and figuratively.

Torrential rain poured down and high winds whipped through the stadium as the two historic foes met in a league game in front of fans at Elland Road for the first time in almost 20 years.

The breakthrough came 34 minutes into the icy, unrelenting Yorkshire deluge when Harry Maguire opened the scoring with something of a milestone goal in United’s season.

Ralf Rangnick’s side were the only Premier League side not to have scored from a corner in 2021-22 and it was their captain who finally broke that duck at the 140th attempt by clambering through a crowded box to head home Luke Shaw‘s in-swinger.

As hostile jeers and hisses rang around the ground, the catharsis for United was evident as Maguire went sliding across the sodden turf in celebration.

The header 👌
The celebration 😎

The centre-back later posted a photo of his jubilant goal celebration on Twitter in which he managed to sum up his club’s feeling of triumph and further goad supporters of the losing side with just two words: “You Reds.”

However, it wasn’t long before people began to notice that something was a little bit odd about Maguire’s chosen picture.

It soon became evident that the United skipper had shared an edited image that appeared to include a random (and particularly glum) man Photoshopped into the crowd in the background.

In no time, social media sleuths had found the original image (which Maguire had also posted on his Instagram) and were demanding answers.

The situation remained a mystery until Maguire cleared things up with an explanatory tweet on Monday morning.

“For everyone asking, it’s my good mate, a big Leeds fan. He was at the ground but not in the pic,” the United defender wrote. “He’s been giving us some stick all week so thought I’d add him in.”

For everyone asking, it’s my good mate, a big Leeds fan. He was at the ground but not in the pic. He’s been giving us some stick all week so thought I’d add him in 😀🔴

Despite being on the pitch for 85 minutes against Leeds, Cristiano Ronaldo did not register a goal or assist despite his side finding the net four times.

It was the sixth time in his past seven league appearances that Ronaldo has drawn a blank when it comes to direct goal involvements for United, though he did end his longest scoring drought in more than a decade last week with a goal against Brighton. But the Portugal captain can at least take solace in the fact that he did write his name into the history books at Elland Road, simply by virtue of having been around for a long time.

Ronaldo set a Premier League record for the longest gap between appearances against a single opponent, having last faced Leeds some 18 years and 125 days before Sunday’s encounter. United won 1-0 at Elland Road on Oct. 18, 2003, on Roy Keane’s headed goal.

Ronaldo started up front alongside Ruud van Nistelrooy, spearheading a team that also boasted the likes of Tim Howard, Rio Ferdinand, brothers Gary and Phil Neville, Darren Fletcher and Paul Scholes. Perhaps unsurprisingly, the 37-year-old Ronaldo is the only member of that matchday squad to still be playing professionally today.

Two months into his first spell with the Red Devils, the teenage Ronaldo was unable to score his first goal for the club at Elland Road, with his most notable impact a yellow card received for diving.

Leeds were relegated at the end of that season, just three years after reaching the Champions League semifinals, meaning Ronaldo would not face them in the league again before leaving for Real Madrid in 2009. Although he returned for his second spell at Old Trafford in September, Leeds had already been on the wrong end of a 5-1 thrashing there before Ronaldo completed his transfer from Juventus.

The fact that his second league appearance against Leeds came 6,701 days after his first is a testament to his remarkable longevity — but something tells us he would rather have marked the occasion with a goal then a statistical footnote.