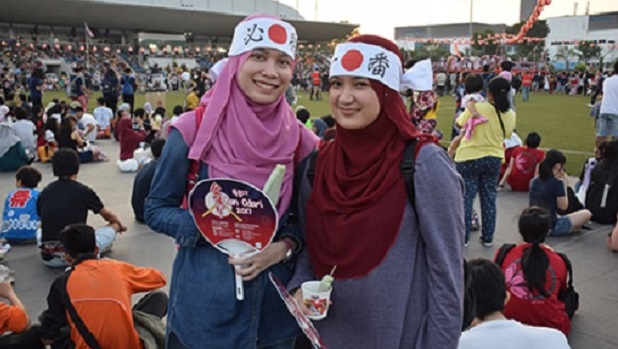 Bon Odori (not to be mistaken with Bon Jovi) is a festival that has been celebrated in Japan for centuries. Obon or just Bon is a Japanese Buddhist custom to honour the spirits of one’s ancestors. Odori means lively dance. Hence, Bon Odori is a family reunion where people return to ancestral family places and visit and clean their ancestors’ graves – with dances thrown into it.

In Japan, the dance – lasting for three days – is usually performed during the summer Obon season. Recognized as a National Important Intangible Folk Cultural Property, the dance traces its origins back more than 700 years to a harvest festival initiated around the late 1280s. Some say the origin of Bon Odori goes back to the Heian period (794 to 1185).

Regardless of when the Bon Odori started, it existed before Parameswara founded Melaka. In Malaysia, the festival dates as far back as 1977 to promote and strengthen cultural ties between the country and Japan by showcasing Japanese food, drinks, art, and dance. From a small affair for Japanese expatriates, the annual event has since attracted about 35,000 participants.

The Japanese Bon Festival actually originated from the Ghost Festival in China, which is being celebrated by Malaysian Chinese on the 15th night of the seventh month (August 12, 2022). On this day it is believed that the “Gates of Hell” are opened and that the dead return to visit their living relatives. Both festivals are part of the Buddhist-Confucian custom to honour and remember ancestors.

However, as speculation of the 15th General Election grows louder, PAS Islamist party thought it could play its favourite religion card to fish for votes. On June 6, Idris Ahmad, Religious Affairs Minister advised Muslims not to participate in the upcoming festival as it contains elements of other religions – based on a study conducted by JAKIM (Malaysian Islamic Development Department).

Treating Malaysian Muslims as if they are so ignorant they can’t differentiate tampon and french fries, Idris insisted the Bon Odori festival could confuse the Muslims. PAS young women’s wing – Ameerah Malaysia – has gone to the extent of banning the dance altogether, saying it is “haram” or forbidden for Muslims to participate in a religious festival that honors the spirit of the departed.

The next day, Penang mufti Wan Salim Wan Mohd Noor told Muslims not to participate the Bon Odori festival for fear it could lead to “syirik” (polytheism). He said – “Since the festival is linked to remembering the souls or spirits of ancestors, it is feared that it could lead to polytheism. Remembering the souls of the ancestors by dancing, worshipping their spirits and others is not encouraged in Islam”.

After cancelled for the past two years due to Covid-19 pandemic, the Bon Odori festival will be held at the Shah Alam Sports Complex in Selangor on July 16 this year. In Penang, where the festival had been held in for the last 10 years, the state tourism and creative economy committee said the state government did not plan to cancel the event scheduled for July 30.

Stunningly, the Sultan of Selangor issued an order today (June 8) to the Selangor Islamic Religious Department (JAIS) not obstruct “anyone” from attending the festival. Not only Sultan Sharafuddin decreed the religious department to hand off Bon Odori, the monarch has also expressed his displeasure over the dubious study done by JAKIM to ban the Japanese traditional festival.

After being summoned to the Palace, JAIS director Mohd Shahzihan Ahmad was told that the Sultan disagreed with the religious department’s decision. With tail between legs, Mohd Shahzihan said – “His Majesty is of the opinion that there are many cultures that have links with religion, but it is not necessarily that the religion is present in the culture”.

The Malaysia Islamic religious department might be too stupid to get the message, but the Selangor Sultan was basically mocking them – “You can take the PAS-Malay out of the kampong (village), but you can’t take the kampong out of the PAS-Malay”. But the Malay Sultan was not done with the radical, extremist and narrow-minded PAS leaders, who often act as if they are the messenger of God.

The religious department was shocked when Sultan Sharafuddin ordered officers from JAIS and the Shah Alam City Council to attend Bon Odori to see with their own eyes what actually happens during the dance festival. Apparently, the monarch himself has in the past attended the annual festival and did not find anything that could confuse, let alone corrupt the faith of Muslims.

It’s basic common sense that if the Bon Odori is such a threat to the faith of local Muslims, a sizable of them would have left their religion over the last 45 years since the introduction of the festival in the country. The fact that not a single Muslim has been influenced to join the Bon Odori sect proves it is nothing but a harmless festival for everyone to have fun.

Now that the Sultan of Selangor has decreed that Bon Odori is as harmless as a baby, will JAKIM as the federal government agency that administers Islamic affairs in Malaysia dare to go against the state monarch? If Religious Affairs Minister Idris Ahmad keeps quiet, it will not only undermine his Islamic credential, but also proves that PAS leaders are a bunch of fake holy men.

Do not Muslims in the country flock to visit their ancestors’ graves during Hari Raya Aidilfitri (Eid Al-Fitr) festival to offer prayers and clean the area? Isn’t that also an event that honours the spirit of the departed, one way or another? Are playing firecrackers or the act of giving “duit raya” (money) in a sealed green envelopes part of Islamic teachings to begin with?

The royal decree is not only a slap in the face of the corrupt and extremist JAKIM and PAS Islamic party, but also Prime Minister Ismail Sabri. The turtle-egg man, who returned from a six-day trip to Japan last month, celebrated his maiden visit to the Land of the Rising Sun as having created new opportunities in all sectors to bring immense benefit to the country and its people.

Heck, the prime minister has even trumpeted that his policy to empower Malaysia’s Look East Policy will promote the “Keluarga Malaysia” concept, so much so that over 1,000 Malaysians will be sent to gain work experience in Japan. Unless Sabri plans to send non-Muslims, the government’s anti-Bon Odori festival means the PM is guilty for exposing Muslims to the Japanese culture.

In the past, Sultan Sharafuddin of Selangor rarely expresses his opinions or disagreements over religious matter being administered by JAIS or JAKIM. For him to do so now means the country is on the wrong track that could cause extremism as well as economic destruction. The World Bank has warned that most countries are headed for a recession – even the possibility of the return of 1970s “stagflation”.

Not only the World Bank has slashed its global economic growth forecast by nearly a third to 2.9% for 2022, the situation could turn for the worse. World Bank President David Malpass said global growth could fall to 2.1% in 2022 and 1.5% in 2023, driving per capita growth close to zero. Does JAKIM or PAS Islamic party know what does stagflation mean?

It was already bad that foreign investors are fleeing the country like a plague due to political instability and undesirable investment climate. The last thing PM Ismail and Malaysia want to see are Japanese companies like Mitsubishi Corporation, Mitsui & Co Ltd, Marubeni Corporation, Mitsubishi Power and others stop or slash their trade investments in the country due to religious extremism.

The Sultan of Selangor has every reason to be furious. The anti-Japanese festival has been widely reported in Japan. Shah Alam, the venue of the Bon Odori Festival, is home to several big Japanese manufacturing facilities like Panasonic, Sharp and Shin-Etsu Chemical. Obviously, diplomatic and trade ties between Japan and Malaysia could be seriously affected if the offended companies decide to boycott Malaysia.

This is not the first time the Sultan clashed with JAKIM over religious matter. Two months ago (April), the monarch decreed that JAKIM cannot issue any statement regarding the decisions made by the Muzakarah Committee of the National Council for Islamic Religious Affairs (MKI), following the appointment of Sultan Sharafuddin by by the Conference of Rulers to be MKI chairman.

The prime minister, who previously was the chairman of MKI, has been demoted as deputy of Selangor Sultan. The move was taken primarily because the arrogant JAKIM had repetitively abused its position as a federal government agency under the Prime Minister’s Department to usurp the power of the monarch as the head of Islam.

In December 2021, Selangor Sultan Sharafuddin issued a royal decree banning politicians from preaching Islam in the state. The decree was specifically targeting the Islamic Party PAS. It was not the first time the Palace revoked the teaching accreditation to politicians. The Selangor Royal Court council made a similar decision back in March 2019, and again in August.

PAS extremists were upset with the royal decree because it would affect the Islamist party’s ability to spread fake news and falsehoods among Malay voters. A PAS leader, Ahmad Dusuki Abdul Rani, was up in arms, claiming that the ban would only widen disunity among Muslims. He even spread dangerous rumours and fears that the royal decree would allow the enemies of Islam to “rejoice”.

The PAS leaders, riding on Islam, had also gone as far as conspiring with Muhyiddin backdoor government and faked the revocation of the emergency laws without the consent from the Palace, a move tantamount to usurping the powers of the King in 2021. It was an act of waging war against the Yang di-Pertuan Agong (the King), an offence that carries capital punishment – “death penalty”.