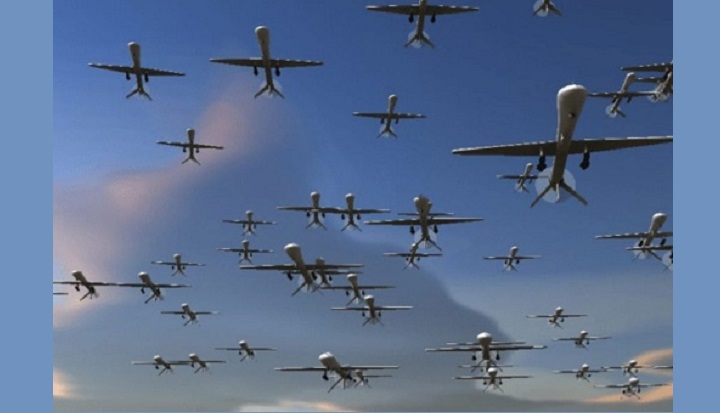 China’s third aircraft carrier was supposed to be launched on April 23 to mark this year’s People’s Liberation Army Navy (PLAN) Day. However, it was delayed by over two months due to the Covid-19 outbreak in Shanghai. Larger than the previous two carriers, the third aircraft carrier – Type 003 – subsequently projected to be launched as soon as June 3, which coincides with the Dragon Boat Festival.

Satellite imagery from US-based think-tank CSIS dated May 31 showed that the dry dock where the Type-003 was positioned has been cleared of other shipbuilding projects, leaving an open path for the latest carrier to enter the Yangtze River. But the date of the Chinese newest, most advanced aircraft carrier, appears to have been delayed again until June 30.

Unlike its sister carriers Liaoning and Shandong’s outdated “sky-jump” Soviet technology, Type-003 will use CATOBAR (Catapult Assisted Take-Off But Arrested Recovery) system for the launch and recovery of aircraft from the deck of an aircraft carrier, like the one used by the U.S. This will allow China to launch a wider variety of fixed-wing aircraft with heavier payloads and more fuel

However, unlike America’s EMALS, Chinese engineers have successfully developed a new electromagnetic catapult technology called IEP (Integrated Electric Propulsion) system. This allows China’s third aircraft carrier to have not only the “flattop” design, but also uses an electromagnetic catapult system – even though it does not have a nuclear reactor (all U.S. aircraft carriers are nuclear-powered).

The Chinese IPS is designed to significantly increase fuel efficiency for the aircraft carrier’s conventional power plant. Another reason China did not copy EMALS – the unreliable of the U.S.’ electromagnetic catapults. In May 2017, President Donald Trump criticized EMALS during an interview with Time, saying how the EMALS costs hundreds of millions of dollars more, but with critical failures.

The progress of the Type-003 is quite impressive considering that it was only in 2019 that Shandong carrier entered service, about 7 years after Liaoning entered service in 2012. The Liaoning, which was bought from Ukraine in 1998, was upgraded by China prior to commissioning in 2012. So, what’s the big deal with the Chinese third aircraft carrier?

It’s a big deal because while China took between 5 to 7 years to learn the Soviet technology before domestically manufacture Shandong in 2015, it took an even shorter time (construction at the Jiangnan Shipyard started since 2018) to build its “second generation” aircraft carrier capable of rivalling the US’ own aircraft launching technology.

Crucially, the new IPS will allow Type-003 to be armed with high-energy consuming laser weapon systems and electromagnetic guns. Contrary to the old belief, the latest aircraft carrier shows China doesn’t need to copy the U.S. and use nuclear reactors to support EMALS and other energy-hungry weapons on the ship. It now has more advanced technologies to solve problems.

Matthew Funaiole, senior fellow at the CSIS’s China Project, said the Type-003 (likely to be operational in 2024) would be the Chinese military’s “first foray into a modern aircraft carrier”. He said – “This is a pretty significant step forward. They’ve really committed to building out a carrier program, and they continue to push the boundaries of what they’re able to do.”

Known for its speedy construction processes, the Chinese fourth aircraft carrier, believed to be the first nuclear-powered aircraft carrier, will be even faster to build. Mr Funaiole said the progress of Type-003 points to China’s fourth, fifth and maybe even a sixth carrier. Analysts who laughed at Liaoning and Shandong should realize that both these two carriers are really meant to be training platforms.

The Type-003 (with displacement of 80,000-100,000 tonnes) and subsequent carriers are the real challenge to the U.S. At least two types of fighter jets have been tested aggressively for the new aircraft carrier – J-20 Mighty Dragon and J-35 (J-31 / FC-31) stealth fighter jets. Xian KJ-600 airborne early-warning aircraft, Z-20F helicopter and upgraded J-15T fighter are all ready for the third carrier.

However, China’s focus isn’t on aircraft carrier alone, a game which the U.S. has mastered decades ago. To be ahead of its rival, it has just launched the country’s most-advanced large unmanned ship – Zhu Hai Yun – on May 18 that can be controlled remotely and navigate autonomously. The drone ship carries 50 unmanned systems, including drones, boats, submersibles, and other vessels.

Built by the Research Institute of the China State Shipbuilding Corporation Limited (CSSC), the gigantic drone ship features a high-speed “hydrofoil trimaran” design. It is 88.5 metres long, 14 metres wide, and 6.1 metres deep, with a designed displacement of 2,000 tonnes. The drone mothership can sail at 13 knots (24 km per hour), with a top speed of 18 knots (33 km per hour).

Believed to be the first drone ship of its kind, China has deliberately played down the role of Zhu Hai Yun as a vessel that conducts ocean research. But the new ship, powered by Intelligent Mobile Ocean Stereo Observing System (IMOSOS) developed by the Southern Marine Science and Engineering Guangdong Laboratory (Zhuhai), can definitely be deployed for intelligence gathering – even military missions.

Construction of the Zhu Hai Yun began in July 2021, with delivery expected end of this year. According to chief designer Fan Lei, the power systems, propulsion systems, intelligence systems, and survey operation support systems are all independently researched and developed by China. While the real capabilities of the vessel are top secret, there is concern it is vulnerable to jamming and hijacking.

The drone ship is not designed to navigate busy seaports autonomously, at least not now, but instead will be navigated remotely until it reaches open water. Thereafter, the AI (Artificial Intelligence) system will take over and execute pre-programmed missions. The most immediate benefit to China is the knowledge gathered about relevant waters through the collection of data by the UUVs.

Valuable data gathered and analysed by UUVs (unmanned underwater vehicles) can help Chinese submarines operate more efficiently and effectively in addition to instil greater confidence in the region. But the AI-powered drone carrier is more than an expensive toy for marine disaster prevention and mitigation, seabed mapping and maritime search and rescue.

Military analysts believe the intelligent “mothership” could launch swarms of unmanned aerial vehicles (UAVs) for not only maritime reconnaissance and surveillance operations, but to cripple Taiwan’s defence system. Last month, a former Taiwanese Navy officer revealed China has created mockups of a Taiwanese port and military vessel as targets to test its ballistic missiles.

Besides a diverse arsenal of ballistic and cruise missiles that could be used to neutralize U.S. bases across the Pacific region, wargames conducted by China show the value offered by swarms of relatively low-cost networked drones with high degrees of autonomy. To deter Chinese invasion, Taiwan has adopted a stubborn defence strategy – the “porcupine” warfare.

Instead of buying expensive conventional equipment such as tanks, battleships and submarines – which are hard to hide and easy to strike with a missile – a “porcupine” strategy would focus on agility and concealable weapons such as the portable Javelin and Stinger missiles. The deployment of hundreds of anti-ship, land-attack and anti-air missiles are like the porcupine spines.

To prevent excessive human casualties and the loss of expensive military assets, China’s development of drone swarming capabilities may be part of its strategy to defeat Taiwan’s defensive “porcupine” strategy. Hundreds – even thousands – of cheap drones that could talk with each other could swarm and overwhelm Taiwan’s defence, forcing it to prematurely activate its air defense.

A second round of kamikaze drones or ballistic missiles could be sent to attack Taiwan critical military targets once the location of its defensive positions is revealed. The future warfare is all about drones. Days ago, images of drones of different types on the deck of Chinese aircraft carrier Shandong have raised eyebrows of Western military analysts.

It appears that even a training aircraft carrier like Shandong could be transformed into a lethal vessel by loading it with drones which could operate together in networked swarms. The Voice of America said that deploying vertical takeoff and landing drones on aircraft carriers was originally a U.S. idea, but it seems that China has surpassed the US in turning the idea into reality.