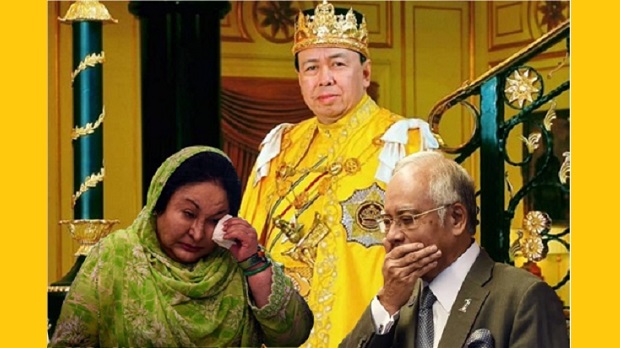 Drama King Najib Razak, the former Malaysia Prime Minister currently serving 12 years in prison for looting the state investment fund 1MDB, is so desperate to get out of jail that he has resorted to fake his health. Even before the crook began plundering people’s money through the 1MDB scandal, he had made his fortune from dubious projects as former defence minister.

Serving as defence minister for about 15 years (1990-1995 and 1999-2008), he would have had accumulated tens of billions of dollars in kickbacks. With his extraordinary wealth, what Najib needed to do is to snap his finger and all the prison officials would be his slaves. His motto – “Cash is King” – has seen how the prison department becomes his errand boy in less than a month he was sent to jail.

His second corruption trial involving  billions of 1MDB funds at the High Court today was cut short after the corrupted Prison Department claimed Najib’s condition was so bad that he might kick the bucket. However, as it turned out, the crook was as healthy as a bulldog. Health director-general Dr Noor Hisham Abdullah said Najib was treated and was already discharged.

Dr Noor has rubbished that the ex-PM was admitted to the General Hospital last Friday (Sept 9) for an emergency treatment. Instead, he was admitted as an elective case to ensure that his health is in good and optimum condition. After screening and tests were conducted, senior experts had unanimously agreed that Mr Najib could be discharged from the hospital.

The rumours of Najib’s deterioration health were deliberately spread by his own family to achieve three objectives. First – to get him out of prison and spend his time in a first-class hospital instead. Second – to win sympathy from gullible supporters to stay politically relevant. Third – to seek a royal pardon based on health reason. It’s amusing that he had no health issue whatsoever prior to serving the jail term.

Unfortunately, Selangor Sultan Sharafuddin Idris Shah refused to be tricked and scammed. On the same day Dr Noor declared that the former premier is in the pink of health, the Malay Ruler has revoked the titles that were conferred by him to Najib Razak and his wife Rosmah Mansor. Like her husband, Rosmah has also been found guilty of corruption by the High Court.

Effective immediately, Najib’s “Datuk Seri” and “Datuk” titles that were awarded in 2004 and 1992 as well as “Datin Paduka Seri” title awarded to Rosmah in 2005 have been stripped. However, Najib still has nine titles from Pahang, Perak, Melaka, Kedah, Penang, Perlis, Sabah and Sarawak, while Rosmah has titles from Pahang, Melaka, Kedah, Sabah and Sarawak.

Even before the High Court sentenced Najib to 12 years in prison and fined RM210 million for the crimes involving RM42 million stolen from SRC International Sdn Bhd (a subsidiary of 1MDB) on July 28, 2020, the Sultan of Selangor had proactively suspended the titles on May 10, 2019. After the Court of Appeal and Federal Court upheld the High Court’s decision, the monarch revoked the titles.

The Selangor Sultan was not the first monarch that had suspended or revoked Najib and Rosmah’s titles. As early as Oct 26, 2018, in order to “protect the stature and dignity” of the royal institution, the Negeri Sembilan Malay Royal House decisively stripped “Datuk Seri Utama” title conferred on disgraced Najib Razak in 2005 as well a similar title it gave to his wife Rosmah in 2006.

But Sultan Sharafuddin of Selangor has not only stripped Najib naked of his titles, but stunningly expressed his support for Agong’s (King) recent statement that royal pardons cannot be dished out like a set of cheap value meal at McDonald’s. Last week (Sept 5), King Sultan Abdullah said Islamic justice does not give any privilege or exception to anyone who commits wrongdoing.

The King also said that the power to punish and pardon must not be used arbitrarily because it will be held accountable in the “afterlife”. Coming from the horse’s mouth at a time when Najib lawyers were banking on the royal intervention to free the ex-premier soonest possible, it’s the clearest sign from the Malay Monarch that the door for a royal pardon is essentially closed.

The Selangor Sultanate today reminded the people that while the King has the discretionary power to pardon those that have been convicted, it must be done according to the law. The remark was not only bad news to supporters of Najib, but also a slap in the face of Zaid Ibrahim, Najib’s lawyer who has been barking like a mad man after losing his client’s final appeal.

Lecturing politicians, especially UMNO president Zahid Hamidi who instigated and provoked UMNO-Malays to demand intervention from PM Ismail Sabri to sack Chief Justice and Attorney General, the monarch said – “I would like to remind the Executive to always uphold the principle of judicial independence and refrain from any attempts to influence the Judiciary’s justice administration process”.

Sultan Selangor also said the people have to be aware that the Federal, Appeal and High Court judges were appointed by the King upon advice received from the Prime Minister after consultation with the Conference of Rulers as stipulated in Article 122B of the Federal Constitution. Therefore, to ask for Chief Justice Tengku Maimun to be fired is also an attack against all the Malay Rulers.

Should Najib, Rosmah and their walking zombies of supporters worry about what Sultan of Selangor has said and done today? They should be incredibly terrified. By revoking their titles, the Malay Sultan is actually treating Najib and his wife as any ordinary people on the street. Without the royal recognition, it means the former premier is no different than other prisoners.

And with the titles scrapped, the United Malays National Organization (UMNO) will find it difficult to rally voters in the upcoming national election. The value of Najib’s “Bossku” moniker would plunge like a rock because if even the sultan – the head of Islamic religion – does not recognize his past contributions, UMNO politicians would find it hard to convince  Malays to vote for Bossku.

Crucially, the stripping of Najib and Rosmah titles would put pressure on other Malay Rulers to also consider doing the same. Other monarchs might have argued at an early stage that Najib was still considered innocent as he had yet to exhaust all legal avenues. Now that he had lost his final appeal and is serving his sentence, all the sultans or rulers have no excuse not to follow Selangor Sultan’s footstep.

The message from the King, supported by the Sultan Selangor, warning that royal pardons should not and cannot be abused is a wake-up call to the Malay society that they should know when to start feeling shameful of the UMNO-Malay crooks. Both Sultan Abdullah and Sultan Sharafuddin could keep quiet, but they chose to voice their displeasure over pressure from UMNO to blindly grant Najib a royal pardon.

The best part is, Sultan Sharafuddin, who is a descendant of Bugis royalty, was so shameful of self-proclaimed “Bugis Warrior” Najib Razak that the Selangor Sultanate does not want anything to do with him, avoiding the family of crooks with a 10-foot pole. In 2017, Najib admitted that his forefathers were Bugis “immigrants” from Sulawesi, Indonesia. Former PM Mahathir previously had mocked Bugis as pirates.

For a descendant of Bugis Royalty to strip titles from a Bugis Warrior is indeed epic. More importantly, with Sultan Selangor’s open backing for the King, it would be impossible for the King (known for his extremely close relationship with Najib) to suddenly make a U-turn and grant Najib his much desired royal pardon. But don’t expect Najib to stop pretending to be sick just to get out of prison – for a dose of fresh air.