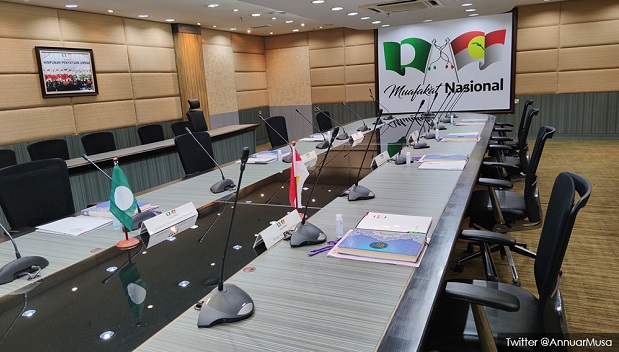 PAS still considers Umno its ta’awun (cooperation) partner, in its goal to build a country favoured by God.

This is despite Umno’s top brass giving PAS the cold shoulder amid continued attempts to rekindle their relationship.

In a statement tonight, PAS secretary-general Takiyuddin Hassan (above) said the party’s central working committee had agreed today to continue pursuing its ummah unity agenda, which it said was the core to uniting Malay-Muslims, bumiputera, and other races to stabilise the country.

Towards this effort, he said PAS still considers those under the ummah unity umbrella – including Umno – as ta’awun partners.

“This is especially in building a good country which pleases God,” Takiyuddin added.

In line with this, he said PAS will keep an open door for talks with all its ta’awun partners to find common ground.

Despite clashing at the polls in Malacca and Johor, PAS continued to pursue cooperation with Umno, a stance it made clear during the PAS muktamar last weekend.

Takiyuddin and other PAS leaders have indicated that the party is conducting informal talks with “certain” Umno leaders that do not involve Umno president Ahmad Zahid Hamidi.

Zahid and his deputy Mohamad Hasan have denied any talks with PAS.

However, Umno vice-president Mahdzir Khalid revealed yesterday that there was a proposal for a limited tie-up between Umno and PAS in 27 parliamentary seats, which would be deliberated on.

Bersatu had expressed concern that PAS was not on the same page with it regarding cooperation with Umno.

However, Bersatu chief Muhyiddin Yassin appeared to be placated by PAS’ explanation that its talks with Umno were not official.

Separately, Takiyuddin reiterated in tonight’s statement that the Islamist party will not cooperate with Pakatan Harapan and rejects “big tent” politics by any party in the 15th general election.

Big tent politics refers to efforts for the opposition to avoid clashes in order to ensure straight fights against BN in the polls.  MKINI

PETALING JAYA: The Islamic party PAS, which has rejected the opposition’s “big tent” concept of political cooperation, said today that PAS could continue to regard Umno as a partner under the concept of unity of the ummah.

PAS secretary-general Takiyuddin Hassan said in a statement that only unity among the Malay political parties could guarantee a government that would be fair and equal to all people.

“This would surely be accepted by the majority of Malaysians, who do not wish to see a repeat of the ‘black history’ experienced before,” he said.

He said the party’s central working committee which met today had decided to continue its commitment and agenda of uniting the ummah as the main axis to unite Malaysians of all ethnicities and religion.

“This will be the main formula towards achieving stability and wellbeing of the rakyat. Therefore, all parties under the umbrella of ummah unity including Umno will be friends to build a successful nation blessed by God,” he said in a statement today.

However, PAS would adopt an open attitude and was prepared to hold discussions to narrow any differences, in the interest of the people.

“PAS is adamant about not wanting to cooperate with Pakatan Harapan and rejects the ‘big tent’ concept, irrespective of who initiates it, to face the next general election,” he added. FMT