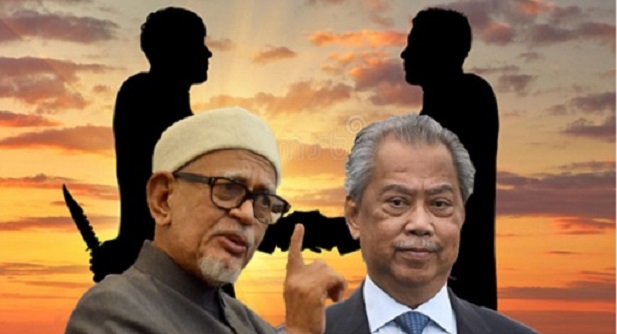 Muhyiddin, who is also PN’s chairman, argued that because the PN coalition has 54 MPs – the biggest bloc – therefore the current government is still the PN government, even though he had been toppled. The 54 PN MPs comprised 31 from Parti Pribumi Bersatu Malaysia (Bersatu), 18 from Parti Islam Se-Malaysia (PAS), 4 pro-PN independent lawmakers and one from the Sabah-based Parti Solidariti Tanah Airku.

In fact, Muhyiddin, the president of Bersatu who led the PN coalition in supporting lame duck PM Sabri, had gloated how he played an important role back in August 2021 in negotiation with the leadership of Borneo – Gabungan Parti Sarawak (GPS) and Parti Bersatu Sabah (PBS) – to back Mr Ismail Sabri as the country’s next leader. GPS possessed 18 MPs while PBS has 1 lawmaker.

Together with UMNO’s 41 MPs, the backdoor government commanded 114 MPs in the 222-seat Parliament, allowing it to remain in power despite a change of prime minister. So, how could the current government isn’t the same “Perikatan Nasional” government, when in fact all the 114 MPs who support PM Sabri are the same lawmakers who used to support Muhyiddin previously?

However, UMNO gave Bersatu the middle-finger, arguing that the UMNO-led Barisan Nasional (BN) coalition had never been a component of Perikatan Nasional from the beginning. Therefore, the backdoor PN government of Muhyiddin was dead the moment the former premier (reluctantly) resigned on August 16, 2021, never mind UMNO has only 41 MPs.

The United Malays National Organization (UMNO) insists that the defeated Barisan Nasional government has returned to power, albeit an unelected one. Even though PN has 54 MPs, Muhyiddin could not have had become a prime minister in March 2020 without BN’s 41 MPs. Likewise, BN could not return to power without PN’s support for Ismail Sabri in August 2021.

To make the rivalry between PN and BN, despite both coalitions are governing partners, more dramatic, PAS Islamist party is sleeping with both sides. The Bersatu-UMNO-PAS cooperation is like the Chinese ancient “Romance of the Three Kingdoms”. The difference is, PAS is playing the role as the prostitute who tries to satisfy both Bersatu and UMNO for the lust of power and positions.

That’s not true, of course. When power-crazy Muhyiddin betrayed his own friends and allies in the Pakatan Harapan ruling government (who defeated BN for the first time in history in 2018) in 2020, the plan was to grab power using a Malay-Muslim platform under the pretext of Malay unity. Muhyiddin’s formula was to join forces with PAS to control and dominate UMNO.

UMNO, however, had a very different plan. It had agreed to support Muhyiddin’s backdoor government for two reasons – to return to power and to drop all corruption charges on its leaders, especially the influential former PM Najib Razak and party president Zahid Hamidi. UMNO had never planned to build a permanent relationship with Bersatu. It wanted to return to its former glory as the dominant party in BN.

So, while Muhyiddin hoped his party could – permanently – remain in power with an alliance with PAS to checkmate UMNO, the same way Liu Bei struck an alliance with Sun Ce to face common enemy Cao Cao in the Romance of the Three Kingdoms (not that Muhyiddin is Liu Bei or Sun Ce), UMNO was merely leveraging on Bersatu and PAS temporarily to rejuvenate itself before booting both parties.

Bersatu was strong only as long as Muhyiddin was the prime minister. Once he was no longer in power, the PN began cracking. Worse, not only his party does not have the machinery and grassroots, Bersatu is seen as a toxic party consisting of traitors and frogs that cannot be trusted even by UMNO standard. The party will depend heavily on PAS resources in the next 15th General Election.

However, as gear shifts in preparation for the national polls, the cracks become visible not only within Bersatu, but also between Bersatu and PAS. In June, PAS hinted that it may use its own logo. In July, Muhyiddin announced that both parties agreed to use PN logo, claiming that PAS president Hadi Awang had consented to the use of the common logo. As usual, Muhyiddin lied – PAS leadership did not agree.

PAS deputy president Tuan Ibrahim Tuan Man said it was premature to say PN logo would be used. In fact, the Islamist party said instead of using the PN logo, it preferred its own “full moon” logo. Later, Hadi said PAS would be using a new symbol for its candidates in the coming general election. Caught with his pants down, Muhyiddin then announced the PN will be introducing its new logo.

A month later (August), some PAS leaders openly rejected the use of PN logo, even before the new logo is unveiled. They wanted to maintain PAS’ green party colour logo in Kelantan, Kedah and Terengganu, challenging PN chairman Muhyiddin to prove a new logo would translate to a big victory. In early September, PAS insists the issue of logo still has not been finalized.

While Muhyiddin’s party wanted to confuse and trick rival BN supporters with the same blue colour, PAS leadership said they do not want to confuse their hardcore supporters with the blue colour associated with BN. During the 68th PAS Muktamar (general assembly) last week, PAS deputy president Tuan Ibrahim again said the issue of logo will be discussed in the party’s Supreme Council meeting.

It seems that after mocking and laughing at opposition Pakatan Harapan’s indecisiveness in using a common logo, it boomerang and hit Perikatan Nasional. Now, the PN top leadership can’t even decide whether to use the existing PN logo, a new PN logo, PAS logo or an entirely new symbol. The solution is simple – use PAS logo in the three states (Kelantan, Kedah and Terengganu) and use the PN logo in other states.

The burning question is why Hadi Awang could not, or deliberately refuses to, decisively solve the logo issue? If PM Ismail Sabri suddenly dissolve the Parliament next month, PN will be running around like  a headless chicken. There’s only one explanation why the PAS president is dragging his feet, and doesn’t seem to be serious, over the logo issue.

Mr Hadi could be using his boys to create a conflict out of the logo issue because PAS is slowly leaving PN in favour of BN. In order to decouple from the sinking ship PN, the Islamist party has to manufacture discontent and displeasure at the grassroots level to justify an exit without looking like a traitor who betrays Muhyiddin, who had showered PAS leaders with power and positions.

During the same 68th PAS Muktamar (general assembly) last week, the calls are growing louder to revive the national cooperation between UMNO and PAS, glorified as “Muafakat Nasional” under the pretext of Malay-Muslim cooperation. PAS has claimed that the pact, made in 2019 between the Islamist party and UMNO nationalist party, was still alive and might feature in the upcoming election.

Even though UMNO president Zahid has repeatedly proclaimed Muafakat was as good as dead and the party should go solo, senior UMNO leader like Annuar Musa believes the party should continue working with PAS. The best part was when PAS spiritual leader Hashim Jasin confirmed this week that there have been “secret meetings” between PAS and UMNO to ensure straight fights in the 15th General Election.

Shocked with the revelation, Muhyiddin said he will demand an explanation from PAS leadership over the secret discussions with UMNO. It was a slap in the face of the Bersatu president because he was kept in the dark. As the PN chairman, Muhyiddin definitely felt betrayed by Hadi, who quietly sent his lieutenants to talk with UMNO without informing Muhyiddin.

It was already bad that a motion was passed at the 68th PAS Muktamar to continue cooperation with UMNO through Muafakat Nasional platform for the national election. It becomes worse when Hadi backstabbed his supposedly best friend Muhyiddin with the secret negotiations, knowing very well that UMNO has already rejected any cooperation with Bersatu.

For the Islamist party to engage secretly with UMNO can only mean one thing – PAS is ready to abandon Bersatu and PN. Exactly how could PAS work with UMNO when UMNO is ready to slaughter Bersatu? If PAS has nothing to hide and its intention was merely to convince UMNO that the real enemy was Opposition Pakatan Harapan, not Bersatu, why didn’t PAS inform Bersatu about the secret meetings?

Hadi Awang saw the Najib imprisonment on August 23 as a good excuse to approach UMNO to revive their cooperation. Without “Bossku” Najib to campaign for UMNO, the party is indeed crippled, leading to attempts to persuade the Malay nationalist party to work with PAS. So far, Zahid has not poured cold water into the idea of straight fights between Muafakat Nasional and Pakatan Harapan.

But even if PAS eventually betrays and backstabs Bersatu, nobody will feel sorry for Muhyiddin. A traitor deserves to be betrayed. Besides, Hadi Awang is just another snake oil salesman disguised as a holy man in the Islamist political party. He will sell his wives and daughters to the highest bidder. Bersatu should prepare for the worst case scenario – going solo against UMNO-PAS.