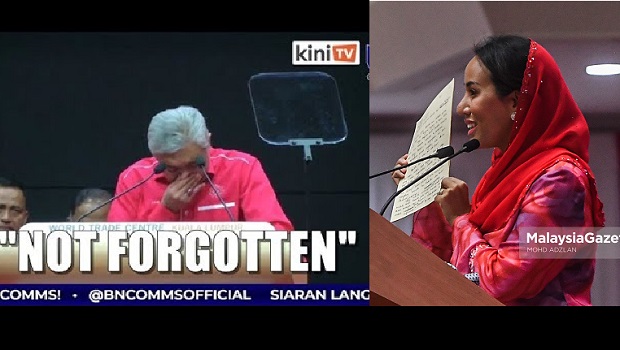 Zahid wants the constitution tweaked to remove a clause that gives a veto power to component parties on applications by new parties wanting to join the coalition.

“It is a constitution that is outdated and needs to be changed,” he said, adding that BN also needs to move with all races to bring about “nation-building”.

According to Zahid, there were currently eight parties deemed “friends of BN”, but that are unable to be a full component of the coalition.

“There are also another seven more parties that have applied to join the coalition.

“This means all these parties have high expectations of BN,” he said.

He added that in the past, former prime minister Najib Razak had shouldered all the responsibility on anything that took place within the coalition.

“We must now ensure that BN makes collective decisions to ensure collective accountability. I don’t want what happened to Najib to happen to me,” he said.

He also called for the coalition to move forward with a three-pronged strategy, namely to create chemistry, develop understanding, and aim for collaboration.

He also reassured “friends of BN” parties that they would be given seats to contest in the next general election (GE15).

“You don’t have to ask, we will give you a seat that we think you will win,” he said, referring to a request from Makkal Sakti president R S Thanenthiran for his party to be given space to contest in GE15.

Zahid also said BN should be seen with a new political perspective in that it was not just about the coalition “rebounding” (from the loss at GE14) but also “restructuring.”

He said there needed to be a “cleansing from within” the party mechanism, in order to do what was best for both Umno and BN.

“We must make sure there is no fox in the chicken coop,” he said.

If BN were to win, Zahid said a new version of the Malaysian Indian Blueprint would be established to support and develop the Indian community.

“If Najib gave RM100mil, we will give RM500mil,” he said, acknowledging that even this amount was not enough to develop the Indian community.  FMT