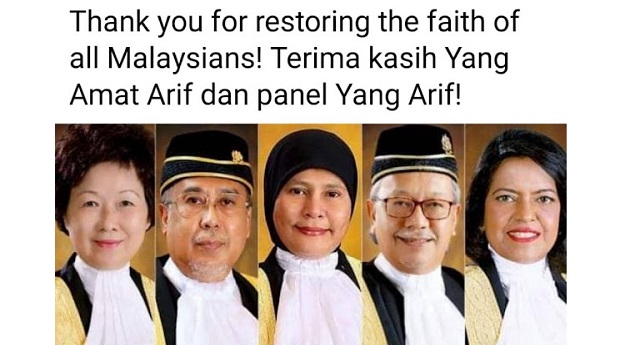 She also said the statements made showed that they had not read the reasoning of the judgment and did not understand the law, thus leading to irrelevant statements and comments.

“My personal opinion is that the comments made by people who don’t understand show their lack of understanding because they don’t read the judgment.

“Of course, the whole thing can be said to be based solely on sentiments without being based on an understanding of the law and the reason for the judgment itself, the court’s decision itself, is not really understood,” she said.

Tengku Maimun was speaking to reporters after attending the Second National Litigation Conference 2022 at the Asian International Arbitration Centre (AIAC) here yesterday as a guest of honour.

The Chief Justice had been asked to respond to statements by politicians attacking the judiciary after the five-member bench led by her on Aug 23 affirmed former prime minister Datuk Seri Najib Razak’s 12-year jail sentence and RM210mil fine for misappropriating RM42mil from SRC International Sdn Bhd, a company linked to state fund 1Malaysia Development Bhd.

The landmark decision saw Najib become the first former prime minister to be sent to jail.

Tengku Maimun also said she was grateful to have the backing of the Malaysian Bar, which issued press releases to rebuke the attacks by the politicians.

“The Malaysian Bar has in fact issued press releases and they have explained the real positions of why the cases were decided that way and why politicians should not make conclusions or make statements, so I’m very grateful for the support,” she said.

Her advice to the public would be to understand the court’s decision by reading the judgment or consulting those who are more knowledgeable about the matter, she said.

“That’s the basic thing, isn’t it? If you don’t understand, you ask,” she said.

Earlier, Kuala Lumpur Bar Committee chairman Vivekananda Sukumaran, in his speech, said judicial power and judicial independence are fundamental and sacrosanct to the principle of the separation of powers that stands as one of the basic structures enshrined in the Federal Constitution.

He also said public confidence in the judiciary is the hallmark of a mature and effective democratic government under the Constitution.

“The Malaysian Bar has consistently defended the independence of the judiciary and public confidence in the judiciary as part of its statutory obligation to uphold the cause of justice without regard to its own interests or those of its members, uninfluenced by fear or favour,” he said.  ANN

From the start of the event, shouts of “solidarity”, followed by “Bossku” were constantly heard, with participants routinely rising to their feet to show their support for Najib.

In a rare move, Najib’s children were also given time to sing praises of their father and speeches by leaders were filled with accolades for Barisan Nasional (BN) and Najib.

Najib’s son, Nizar, claimed that his father had always had a “soft spot” for the Indian community and this was proven by how much he had aided the community during his time as prime minister.

Meanwhile, Najib’s daughter, Nooryana Najwa repeated her claim that her father had always prioritised the people, even at the expense of his own family.

“The people were always first, he even put the rakyat before his own family,” she said.

He said Tamil schools in the country were transformed from “farm stalls” to modern schools and the intake of Indian students for matriculation at university increased during Najib’s time.

“Under ‘Bossku’, Indians got the best deal,” he said, citing the MIB as an example.

MIB was launched by Najib in April 2017 as an official 10-year government blueprint for the development of the Indian community.

Thanenthiran said Najib was like a mentor to him, adding that he had been well-trained by the former prime minister for the past 15 years to always put the rakyat first.

Makkal Sakti also presented their general assembly resolutions to BN chairman Ahmad Zahid Hamidi who was the guest of honour at the assembly.

The party had three resolutions, namely to officially join the BN coalition, to contest in GE15 under BN and to request that positions in government-linked companies (GLCs) be given out fairly to all races.