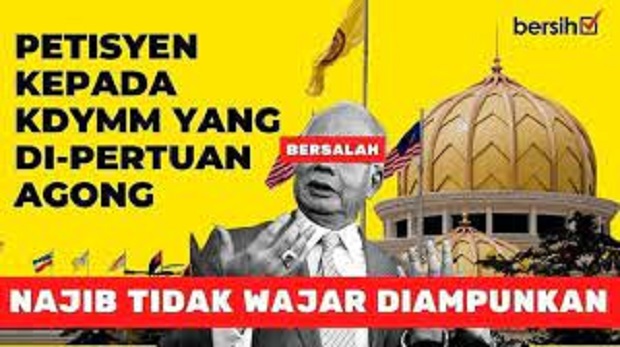 Last week, two social media postings about the former premier made their rounds.

It’s unbelievable the number of people – including those who are supposedly well- informed – who swallow hook, line and sinker these misleading and deceitful messages.

Judging from the comments on some portals, there are Malaysians who believe them.

The first was a posting that claimed “Najib isn’t in a cell. A good friend whose cousin is a senior prison officer at Kajang said Najib is given a house within the prison grounds.”

These houses are supposedly meant for senior prison officers, and it was claimed that Najib is enjoying house arrest.

We should know better because the red flags were already there. It says the information came from “a friend” and if that wasn’t enough, “whose cousin is a senior prison officer”.

Well, a friend of mine whose cousin is a senior prison officer said it’s not true. The media, which often quotes anonymous sources, will never accept information from a third party.

For starters, the Kajang prison complex has homes for wardens with families and a flat for wardens who are single.

They both sit away from the prison detention building and the prison headquarters, where the administration is located.

If Najib is placed in an officer’s home and not a cell, that will surely be leaked out fast and furiously in this digital age of social media.

Don’t expect every prison warden or their family members to be fans of Najib. They won’t cast a blind eye.

This is not 1989, when Abdullah Ang, a former banker convicted of criminal breach of trust, was accorded special privileges while serving time and could reportedly wilfully walk in and out of prison.

Even that was exposed by a newspaper, the Malay Mail, and that was in the pre-Internet age.

Then there’s a video posting showing Najib in a pink baju Melayu, in a home, looking at a 2010 photograph hanging on a wall and joking with four men.

Disturbingly, many angry Malaysians believed this was his prison cell or a hospital ward.

But the video was posted by Najib himself ages ago when he visited a Felda settler, Ithnin Abdullah, in Kledang, Kota Tinggi, Johor.

You can check his Instagram account to view it. Someone deviously used this video to make it look like he is in his new cell or a hospital ward.

Understandably, many Malaysians are upset that Najib, who has committed a heinous crime and sentenced to 12 years’ jail, has been so quick to seek a pardon.

And hardly two weeks after being jailed, he sought to be sent to hospital to have a recurring stomach-related ailment treated, with his daughter saying her father “is highly prone” to stomach ulcers that flare up under stress or during an episode of gastritis.

But even if it were true, the cynicism and scepticism would be irrepressible, as they would be for claims by lawyers and their clients who seek postponement of their cases on medical grounds. It’s the oldest delaying tactic used by lawyers in court and prisoners in jail because going to the hospital or prison clinic is surely better than rotting in a cell.

Last week, the Malaysia Now portal ran a report that said after November 2017, Datuk Seri Anwar Ibrahim spent much time at Cheras Rehabilitation Hospital until his release in May 2018.

The PKR president was sentenced to six years’ jail for his sodomy conviction but was released a week after Pakatan Harapan’s victory in the May 2018 General Election, following a royal pardon backed by Tun Dr Mahathir Mohamad’s new government.

A Google search will reveal many news reports and photographs of these high-profile visits.

Although the Prison Department says all prisoners will be treated equally, it’s easy to think that VVIP prisoners such as ex-politicians, ex-lawyers, ex-corporate figures and ex-police officers would get a slightly better deal.

For one, at least Anwar and the other politician prisoners had their own cells with attached bathrooms, or were located near the hospital clinics instead of the overcrowded cells.

But there’s no hot water for Najib, so he must bathe in cold water. He is, presumably, provided with a fan and a table, but furnishing will be sparse.

There are sound security reasons for keeping him in solitary confinement. I don’t think the authorities want to risk such prisoners being hurt by their cellmates.

But for now, Najib remains a Member of Parliament. He will continue to draw his allowances and remunerations as an MP.

This, again, will upset many people, but he still has two last ditch attempts to keep his Pekan parliamentary seat.

His lawyers have filed for a review of the Federal Court decision which upholds his conviction in the SRC International Sdn Bhd case, but this could just be clutching at straws.

Then there’s the application for a royal pardon, and while no provision exists in the law for the duration of a prisoner’s jail term before being pardoned, the practice is the person must serve a “considerable time”, and that usually means at least three years.

Besides, Najib still has four other pending cases against him, and surely that will weigh on the King’s decision. How many times can his Majesty pardon him?

But all this debate over whether Najib can remain an MP will be a moot point when Parliament is dissolved. He will automatically lose his Pekan parliamentary seat and will not be able to seek re-election.

If there’s a positive to take from Najib’s case, it’s that Malaysians are learning about our court requirements and procedures.

Many people have asked why Najib was allowed to move freely before the Federal Court judgement, which was his final court procedure of the charge in question.

That’s how our laws, which are based on the British model, work.

Well, he wasn’t denied bail and he had a final appeal platform – the Federal Court. Once it ended, he went straight to jail.

Likewise Rosmah, who was sentenced to 10 years’ jail for each of her three graft charges and fined a total of RM970mil, is at home because she was allowed bail and still has the Court of Appeals and Federal Court to take her case to. It may take two to three years before she finally exhausts her appeals.

The Malaysian court system, which is modelled after the British judiciary, may seem slow, but it provides sufficient avenues for an accused and the defence team to prepare their cases.

Najib may no longer be in the public eye, except for his appearances in court for his ongoing cases, but he’s still a newsmaker because only a fine line separates fame and infamy.

His popular social media platforms are now run by his team, but they still have a large following.

That says a lot, but it would be foolish for Umno to go the general election with Najib as its main cause, and that certainly will also affect the other Barisan Nasional parties.

The electorate wants to know how voting for Barisan can benefit the people and country, rather than treating the general election as a referendum to free or pardon Najib.

Barisan, especially Umno, must get its machinery started instead of talking about influencing party members to sign petitions supporting Najib. The recent Umno meeting may have been good for hardcore Najib supporters to let off steam, but it made the party look like it has lost its sense of objectivity.

That’s not how a party goes into a general election. It’s bad optics.

Let’s be real. Instead of casting doubt and making aspersions at the judiciary, Umno should claim credit for upholding and respecting the laws in this country. No one is above the law, after all.