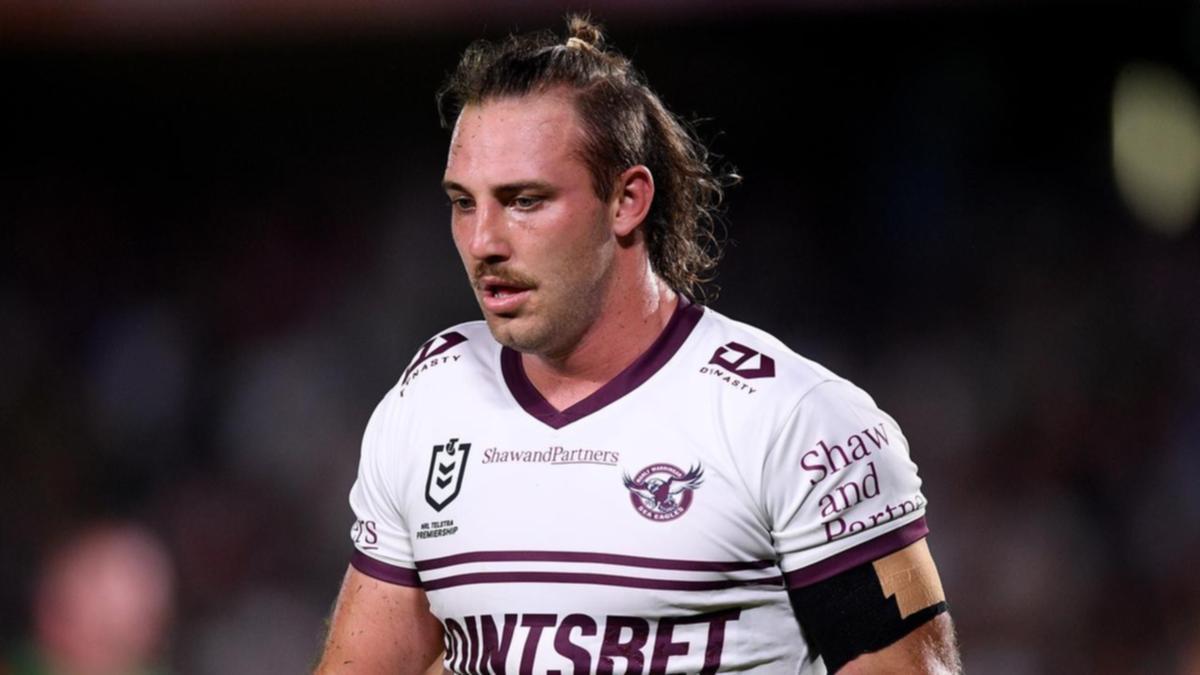 The NRL’s new judiciary system could cost Karl Lawton an extra week on the sidelines after the Manly forward became the second man to be sent off this season.

Lawton is set for a nervous Saturday morning, after being marched just nine minutes into the Sea Eagles’ 40-22 loss to South Sydney on Friday night.

The Manly second-rower was sent packing after uplifting Cameron Murray on his line, before momentum took over and the Rabbitohs captain went head first towards the ground.

Opinion was largely split following the incident, with Phil Gould, Billy Slater and Brad Fittler adamant he should not have been sent off while the likes of Greg Alexander and Benji Marshall were happy with the decision.

Regardless, it meant Lawton became just the second man in the NRL-era to be sent off for a dangerous throw, joining Canberra’s Nick Cotric in 2019.

Cotric was also handed a grade-three charge for his tackle on Tim Lafai, able to take a 25 per cent reduction on his demerit points to miss just three games.

The story may not be so kind for Lawton.

Even if he is handed the same charge level on Saturday, the NRL’s new simplified system means he will miss at least four weeks with an early guilty plea.

There is also a possibility he could be referred straight to the judiciary, making for a ban of five games or more.

“He’s such a hard worker and plays the game at that pace. There was certainly no malice in the tackle.

“At the same time, there will be some sort of consequences to face with that tackle.

“Would you send him off or sin-bin him? I thought maybe a decision could have been disputed there.

“Either way, he wasn’t going to stay on the field.”

Lawton’s absence will be somewhat assuaged by the return of Haumole Olaka’atu from his suspension for Manly against Wests Tigers.

It means the Sea Eagles will boast their first-choice back row for the first time this year, with Josh Schuster making a solid return from injury against the Rabbitohs.

Rumours continue to swirl around Schuster’s future, with reports that his management have approached the club requesting he move to five-eighth.

“There’s that intent and opportunity further down the road, but at the moment he is doing a great job playing where he is,” Hasler said.

“Where he is playing serves the side really well.”

Any chance of that move happening in the immediate future looks unlikely, with veteran Kieran Foran starring at No.6 and keen to play on in 2023.