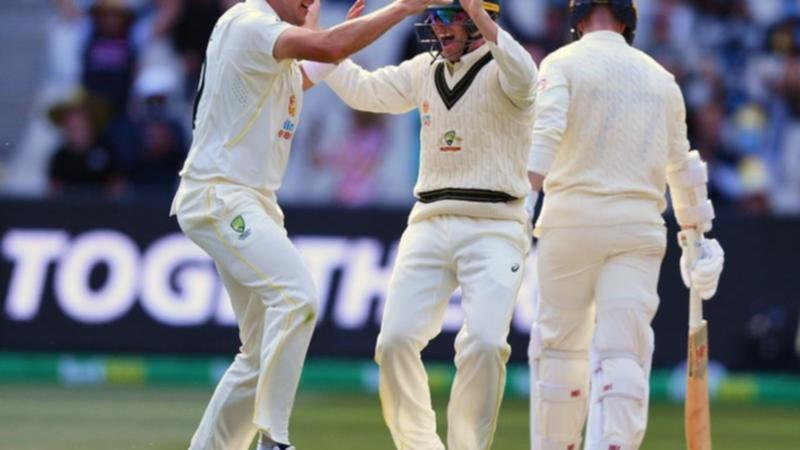 The day started in chaos for England and ended in disarray.

In between they showed plenty of fight to briefly put the Boxing Day Test on an equal footing.

They had turned a potential COVID-19 “game over” into a third Ashes Test “game on”.

But after limping to stumps at 4-31 in their second innings, still needing 51 to make Australia bat again, their hopes of an unlikely Ashes series comeback look shot.

Right now, they will do well to make the Test go into a fourth day.

Things were looking much brighter when they put Monday morning’s four positive tests among support staff and their partners behind them.

The tourists rallied behind paceman Jimmy Anderson for what shaped as their best day so far in this Ashes series.

The one knock on the English legend has been his performance in Australia, but Anderson deserved a five-for as the home side was restricted to 267 in its first innings.

Anderson snared 4-33 and Australia only led by 82 on the first innings.

For once, things were going England’s way – paceman Ollie Robinson limped from the field when a hot caught-and-bowled chance floored him.

There were fears he had injured a hamstring, but he returned soon after.

Then Mitchell Starc was on a hat-trick – captain Joe Root narrowly survived his first ball – and Scott Boland also took two wickets in an over.

When nightwatchman Jack Leach went for a second-ball duck, Ben Stokes took several minutes to emerge from the rooms.

It was back to chaos and calamity in the England camp.

After two dismal losses, England must win the Boxing Day Test if they are to miraculously win the series and reclaim the Ashes.

Monday marked the first legitimate counter punch, but the day did not start well.

England were kept at their hotel after the four positive tests and they were only allowed to head to the MCG after all the players returned negative rapid test results.

They must undergo more testing on Monday night.

After the start of play was delayed for half an hour, Australia resumed at 1-61 in reply to England’s paltry first innings 185.

The tourists immediately tightened the screws, removing nightwatchman Nathan Lyon and snaring the crucial wickets of Marnus Labuschagne and Steve Smith before lunch.

Marcus Harris repeatedly frustrated the England attack as he edged and near-missed his way to a top score of 76, but no other Australian batsman on Monday reached 30.

Even Leach, hammered so mercilessly in Brisbane, claimed a wicket as the bowlers worked solidly as a group.

The standout was Anderson, who claimed the two openers and Smith among his victims.

Unfortunately for the tourists, none of their top order look capable of emulating Anderson’s performance.