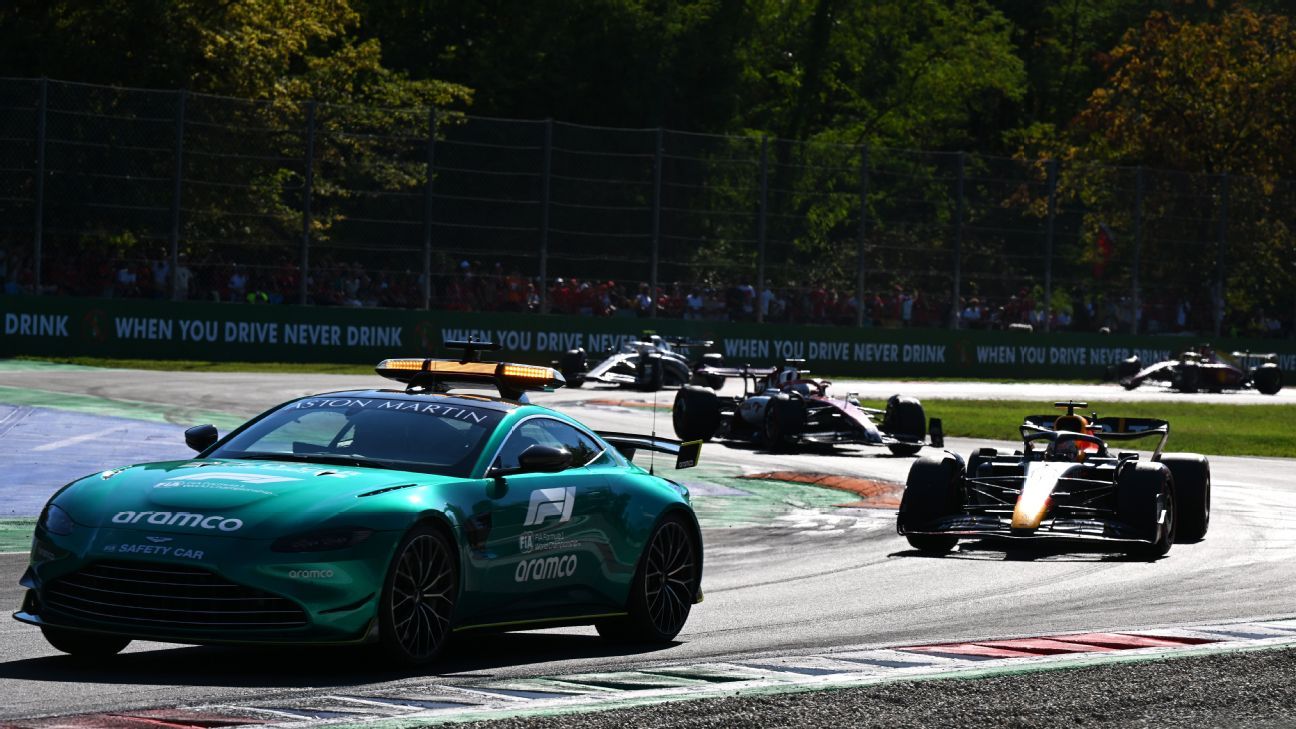 MONZA, Italy — A controversial safety car at the end of a race won by Max Verstappen. Formula One has been here before.

The one that ended Sunday’s Italian Grand Prix was slightly less dramatic and much less impactful than the last time that happened, at last year’s title-deciding Abu Dhabi Grand Prix, but it will still prompt considerable discussion in the coming weeks.

Although the two instances might seem like an obvious comparison, there are two clear differences. Firstly, at Monza, the race finished under the safety car without a restart, while Abu Dhabi infamously finished with a one-lap sprint. Secondly, at Monza, the FIA followed its own rulebook (albeit clumsily); at Abu Dhabi, it did not.

That fact was not lost on Lewis Hamilton, who lost the title to Verstappen last year when then-race director Michael Masi incorrectly applied the safety car restart procedure to force a racing finish at Yas Marina.

“It always brings memories back,” Hamilton said on Sunday about the late safety car. “That is the rule that it should be, right?

“So only one time in the history of the sport that they haven’t done the rule.”

Mercedes boss Toto Wolff — who was famously broadcast as telling Masi “No Michael, no, that was so not right!” as the Abu Dhabi farce played out last December — said finishing under the safety car in Monza on Sunday was the right thing, even if it was unpopular with fans on social media after the race.

“Very clear. There are rules and they are written down and from my perspective, whether I’m Abu Dhabi traumatized or not, these rules have been followed to the dot today,” Wolff said.

“There was a car out on track, there was marshals, and a crane out there. That’s why they didn’t let anybody overtake. And then it was not enough time to restart the race once all cars crashed out.”

Drivers all said they would have preferred to finish under racing conditions. Even Verstappen, who stood to lose the most from that scenario.

“Everyone wants to finish under green flag,” Verstappen said. “We were just short of laps.

“I had a new soft [tyre] as well so I was not worried, even if it was a one-lap shootout.”

Ferrari’s Charles Leclerc, who had the agonising view of the rear of Verstappen’s Red Bull in front of him as he was told the race would finish under the safety car, complained at the time on radio: “Come on! It’s clear!”

“I really wanted this race to start again,” Leclerc said later. “I don’t understand because the last time we passed through the track was clean, but it didn’t happen. Maybe there are things I didn’t know that made a restart impossible.”

As it turned out, a swift restart within the template set out by the rules was immediately complicated by two separate events.

This was alluded to in the statement the FIA sent out shortly after the race, which said: “While every effort was made to recover Car #3 quickly and resume racing, the situation developed and marshals were unable to put the car into neutral and push it into the escape road.”

The nature of Ricciardo’s stoppage also negated the other option available to the FIA stewards, a red flag — which would have neutralised the race and prompted a standing restart from the grid.

“As the safety of the recovery operation is our only priority, and the incident was not significant enough to require a red flag, the race ended under safety car following the procedures agreed between the FIA and all Competitors. The timing of the safety car period within a race has no bearing on this procedure.”

“I think we could have finished the race differently,” he told Sky Sports. “Finishing the race behind the safety car is never great.

“It’s not for us, but for F1 and the show and I think there was plenty of time for the FIA to act differently today.”

While it will likely be a talking point going forward, the focus on the spectacle is a potentially risky thread for F1 to pull on. The desire to finish last year’s incredible season-long fight between Verstappen and Hamilton in racing conditions played a role in the “human error” the FIA later said Masi had made in Abu Dhabi.

But it is fair for F1 to wonder whether better solutions might exist. Fans upset at the outcome of seeing a race finish under a safety car, which had only happened on nine previous occasions in F1, is understandable.

F1 has never been as popular as it is right now, and it is seemingly welcoming swathes of new fans to its audience with every passing race. It is fair to wonder whether a finish like the one we saw on Sunday is smart business for a sport in that position.

A crowd as good as the one at Monza deserved much better than what unfolded in the final laps of the race, whether it followed the rules to the letter or not.

Wolff said he would be on board with the rules changing to force a finish when a safety car is deployed in the closing laps.

“If one is not happy with the regulations, and you want to have a big bang show and two laps of racing and mayhem, I think I’m absolutely up for it,” he said. “But then we need to change the regulations. So I don’t think we should complain about anything that happened because this is the rules.”

It is unlikely there is a simple solution to these situations. Sebastian Vettel won the 2012 world championship under a safety car, when a late Paul di Resta crash in rainy conditions prematurely ended a thrilling Brazilian Grand Prix.

It was anticlimactic on that day, but when it follows the rules, a race finishing under the safety car can always be considered a fair outcome. One of the most compelling parts of a safety car is the element of fortune. Some days it will favour one driver, the next it will favour another.

As Hamilton himself said about safety cars on Sunday evening: “It’s like gambling on roulette … black or red, you know?”