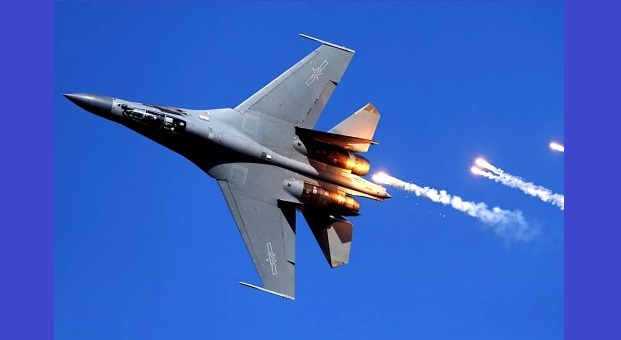 China Lectures Australia After Complains Chinese Jet Harassed Its Spy Plane – Dumping “Chaff” Which Sucked Into Engine After complaints from the Canadian Air Force, now Australia has similarly complained how a pilot of Chinese fighter jet carrying out a dangerous manoeuvre near one of its spy aircraft over the South China Sea. Only this time, the Chinese pilot did not show his middle finger. But it was dangerous enough for Australia to say it has threatened the safety of its aircraft and crew. In an incident on May 26, a Royal Australian Air Force (RAAF) P-8A Poseidon surveillance aircraft was flying over the South China Sea when it was suddenly intercepted by a Chinese J-16 fighter jet. The Chinese aircraft flew very close to the side of the Aussie spy plane, before it released “flares” – a brief burst of bright flame used to counter an infrared “heat-seeking” surface-to-air missile or air-to-air missile. The J-16 then accelerated and cut across the nose of the P-8A, settling in front of the Aussie spy plane at very close distance. The Chinese jet then released a bundle of “chaff” – an anti-radar device which contained small pieces of aluminium, some of which were ingested into the engine of the P-8A aircraft. Chaff […]