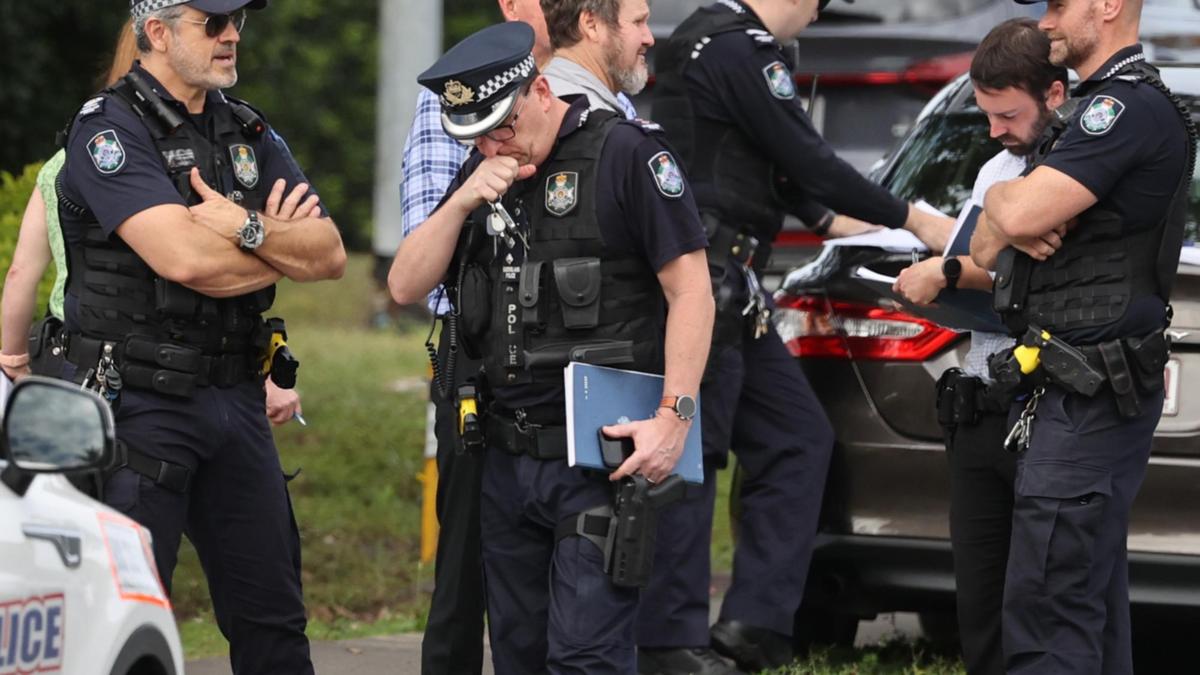 Four men are still on the run after the alleged “horrific” and “brazen” daylight murder of a bikie associate outside a Brisbane gym.

Levi Johnston, 23, was stabbed to death near Goodlife Health Club at Carindale in the city’s eastern suburbs, on the corner of Creek and Pine Mountain Rds, about 1pm on Monday.

He was allegedly stabbed multiple times after he was ambushed by five men in a Nissan Patrol.

The Courier-Mail reported Mr Johnston was known to the Comancheros, but was not a patched member.

Detective Superintendent Andrew Massingham said the circumstances of the alleged stabbing were quite confronting.

“What we have is quite a graphic and disturbing scene, where a young man has lost his life in the middle of a roadway,” he said on Monday.

“There were five males intent on causing significant injury and subsequent death to this individual.

“As the white Mercedes attempted to exit the carpark, it was rammed by what we believe to be a Nissan Patrol, white in colour with a silver bull bar.

“A number of males have then exited the Nissan and also the Audi. They were five in total, five males. They have approached the victim in the driver’s seat. They have then used a crowbar to smash the driver’s window.”

The alleged stabbing took place when Mr Johnson attempted to flee via the passenger side door, ran across the road and was allegedly pursued by two of the men.

One of the men then confronted him at an intersection and stabbed the victim with a knife multiple times, according to police.

Emergency Services were notified and gave first aid to Mr Johnson, but he died from his injuries a short time later.

Four of the men fled the scene in a Nissan Patrol, while the fifth fled on foot after being unable to start a black Audi.

Dog squad officers arrested a man a short distance from where the alleged murder took place about 4pm.

He was taken into custody and is currently assisting police with inquiries.

Superintendent Massingham said the five men were “extremely motivated” in their alleged attack on Johnson.

“These males were extremely motivated to hunt this individual down. This incident was fully captured on CCTV. I have viewed that CCTV and it is confronting and horrific,” he said.

“The footage I’ve seen, I did not see any of them disguised.

“It is a disturbing act, it is a brazen act … it is cowardly.”

No further arrests or charges have been made as of Tuesday morning.