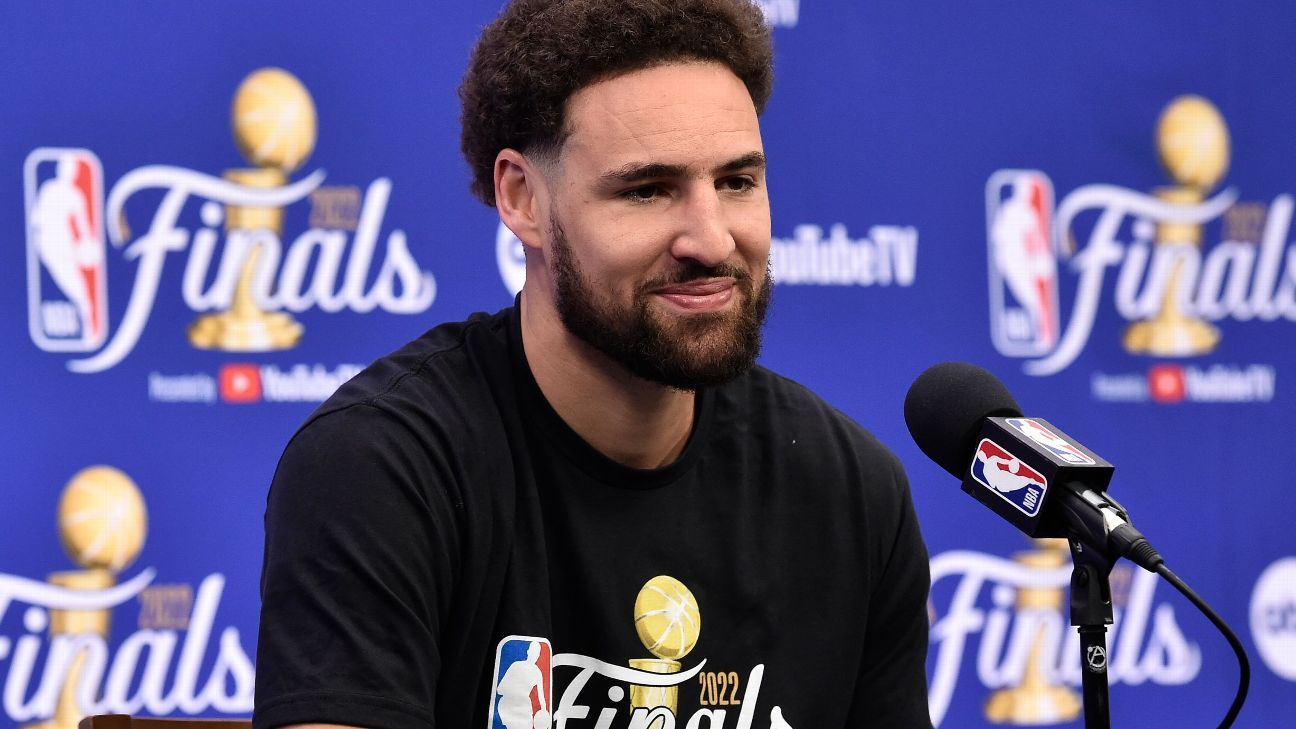 BOSTON — Klay Thompson smiled as the Golden State Warriors guard was told how he’s shooting 10-for-33 in the NBA Finals.

“Thanks for reminding me of my delightful shooting percentage,” Thompson said on Tuesday of his 30.3% effort so far.

Sometimes when Thompson is in a shooting rut, he reminds himself of much better times, perhaps in hopes of rediscovering his shooting touch. Thompson said that he goes to YouTube and watches some of his greatest hits from time to time — in particular, “Game 6 Klay.”

“That’s the beauty of playing in today’s age,” Thompson said. “You can go on YouTube and look up all your great moments.”

As he prepares for what he hopes is a breakout shooting game in Game 3 in Boston on Wednesday, Thompson was asked when he last was online watching himself splash 3-pointers.

“I probably did it yesterday, actually,” he said on Tuesday before Warriors practice. “I remember being in college. When you go through a shooting slump, the video guys will pull up a great game of when everything seemed in unison, your body was working so well, that ball was just flowing off your fingertips.”

Asked what his go-to highlight video is when he needs inspiration, Thompson pointed to his famous playoff persona.

“Gosh, probably just YouTube ‘Game 6 Klay,'” Thompson said. “Because there were some very high-pressurized situations I was in. I ended up shooting the ball well. When you can do it when your back is against the wall, you can do it at any given moment. It’s just about keeping that mental strong.”

The Warriors could use a “Game 6 Klay” cameo in Boston. While the series is tied 1-1, Stephen Curry has carried much of the Golden State offensive load. He is averaging 31.5 points per game. The next Warrior in scoring is Andrew Wiggins at 15.5 points per game. Thompson is averaging 13.0 points but is coming off a Game 2 in which he shot 4-for-19 overall and just 1-for-8 from 3.

That’s a far cry from the Thompson who has built a reputation for shining in Game 6s in the playoffs. He averages 20.7 points and 4.2 3-pointers made in Game 6s. But he scored 41 points and drilled 11 3-pointers in Game 6 against Oklahoma City in the 2016 Western Conference finals and had 30 against Toronto in Game 6 of the 2019 NBA Finals before he tore his left ACL.

Thompson scored 30 points and drilled eight triples in Game 6 of the second round this postseason to eliminate Memphis. In his past seven Game 6s, Thompson has averaged 28.1 points and six made 3-pointers.

Curry did not know that Thompson occasionally will go back and watch his highlights of better shooting days. Curry said “all the best do that.” But he also said Thompson never looks or acts like a shooter struggling when things aren’t going his way.

“History with him has shown there’s no predictor,” Curry said. “He can just take it to another level. Regular season, playoffs, he’s always just found a way to get himself going. Especially in the playoffs, just to make an impact that’s loud. Usually it’s really loud.

“His demeanor never really changes … if you saw him now, you’d think he’s averaging 50 in this series. He’s got just a very confident look about him. That’s the best thing about him.

“It’s all about the work you put in, it’s about the mindset. He doesn’t need any teaching points on that. That’s why there’s so much confidence that at any moment he can go off.”