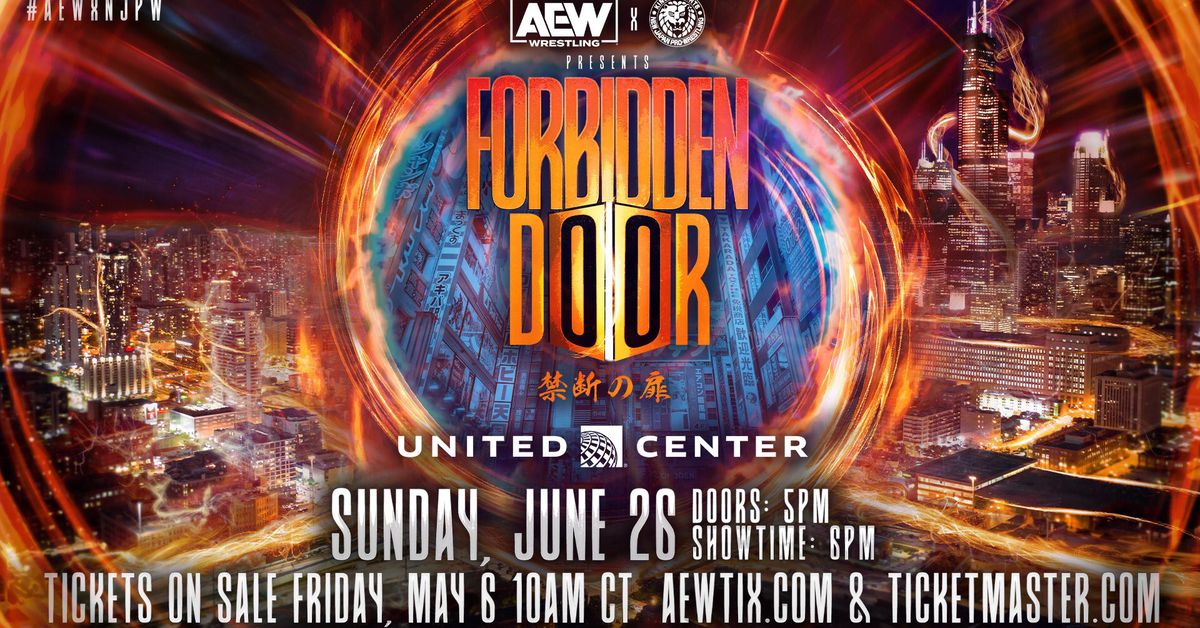 After months of speculation, rumor became reality. AEW owner Tony Khan announced on AEW Dynamite on Wednesday that the first supershow with his company and New Japan Pro Wrestling would take place on June 26 in the United Center.

AEW x NJPW Forbidden Door is unquestionably the biggest cross-promotional supershow of all-time. Shows like this have happened in the past, most notably in 2019 when Ring of Honor and NJPW sold out Madison Square Garden — but this is very, very different. RoH had bled a lot of talent at the time, making that supershow really a more New Japan-focused event with some RoH talent. This, on the other hand, is AEW at the peak of its popularity, and New Japan on the verge of launching its own offshoot brand in the United States.

It’s impossible to even begin to imagine some of the potential matches we’ll get, but I put my fantasy booking hat on to put together my absolute dream card for these two companies.

A show like this needs a champion vs. champion match, and I think Hangman and Okada could tear the house down. It wouldn’t hurt Page at all to lose to someone like Okada, who is already being considered as one of the greatest wrestlers of this generation. I think the entire back-and-forth premise of these two champions both trying to hit their finishing lariats (the Buckshot and Rainmaker, respectively) makes for a great match.

Hangman showed he has stamina in his 60-minute epic against Bryan Danielson, and we all know Okada can go forever. These two would be poetry in the ring.

I’m including the women from Stardom on this card, because I can’t imagine the supershow won’t have any women’s matches on it. I like the symmetry of two champ vs. champ matches, and it would be amazing exposure in the U.S. for Syuri, who some might remember from her brief stint in UFC. This makes sense, especially if New Japan want their sister promotion to grow more of a following in the west.

Jay White and the Undisputed Elite vs. The Golden Elite

Okay, okay … I know this is pie in the sky thinking. I don’t care, this is my card. Can you imagine for a second what would happen if Kenny Omega AND Kota Ibushi returned from injury in Chicago and then reunited the Golden Lovers on the same night? The roof would blow off that building.

Everything is set up for this tenuous relationship between Adam Cole and The Young Bucks to boil over, and it’s here I’d set up a giant story arc of The Elite turning face and rallying against the Bullet Club and The Undisputed Elite. Forbidden Door would be the turning point for Omega to come back into the light after going to his darkest places since his “Cleaner” persona in New Japan, and the last time that happened it was Ibushi who was the catalyst.

Give me this match and I won’t ask for anything out of wrestling again.

Two of the best tag teams in the world give us one to remember. This is a really interesting time in story for both teams. FTR seem to be making a full face turn after parting ways with MJF and The Pinnacle, while G.O.D were recently kicked out of Bullet Club.

These four guys live and breathe tag team wrestling, and to my knowledge they’ve never met in the ring. I don’t think it hurts anyone to have either team win, and it could be the inroad to potentially see FTR go on a quest to collect more tag gold and set their sights on Great-O-Khan and Jeff Cobb, who currently hold the belts.

Sting vs. The Great Muta

AEW loves giving us blasts from the past, and nothing would press that nostalgia button like this. Sting and Muta last met at the 1991 supershow between WCW and NJPW, making this match one that’s been 30 years in the making. We don’t need this to be long, as both guys are really old, but damn would this be great to see.

Muta is currently under contract with NOAH, but I’m sure a deal could be done that would make this dream match happen.

Here’s the one place on the card where I’d actually have a title on the line, and even see it change hands. William Regal’s Blackpool Combat Club is one of the most exciting new stables in wrestling, and putting Jon Moxley, Bryan Danielson and Wheeler Yuta against the Bullet Club offshoot of EVIL, Yujiro Takahashi and Sho would be a banger.

BCC’s strong-style tendencies would fit perfectly as champions in New Japan, and the NEVER Openweight 6-Man titles would be a way to foray them into AEW finally introducing trios titles of their own, which we’ve all been waiting for.

PAC vs. Will Ospreay

Just let these two go. The only risk I see in putting PAC and Ospreay on a card this low is that they might steal the whole damn show and wear the crowd out. Two of the best high flyers in the world putting on a clinic would be a spectacle, GIF-filled match made for social media. I also think they’d have great chemistry in the ring.

I’m so high on Daniel Garcia it’s not funny. I’ve haven’t seen a technical wrestler perform at his level, at his age since … well, ZSJ. This would be a huge pace-change for the show where instead of strikes and big moves, we’re basically going to have two guys try to break each other’s limbs in a variety of ways we’ve never considered. I think this would be an amazing match.

The battle of the GTS. This has been brewing for a while, and Kenta is calling out Punk on social media wanting this. Two guys who share the same finishing move (if we’re being technical, Punk took it from Kenta), trying to win by hitting it on each other. The crowd would be hot for this, and I think the two wrestlers could really build interest in this match on Twitter, as well as promos leading up to the event.

This is another kind of champion vs. champion match, but we won’t call it that because the IWGP Junior Heavyweight Title and TNT Championship don’t really align. Either way, here we’ve got two high flyers with Guevara being a future cornerstone of AEW up against an established, legendary cruiserweight in El Desperado.

Another chance to give some exposure to Stardom’s roster, I love the idea of putting Britt Baker and Saya Kamitani together. Britt is one of the best, most over women’s wrestlers on the planet, and Kamitani has a huge following as a former idol who was part of the group AKB48.

I need Andrade El Idolo to get a better angle, because he’s dying on the vine for me in AEW. This whole money-based boss leader thing really isn’t doing it for me, and the best turn comes by way of a Los Ingobernables reunion.

We’ve already established CHAOS in New Japan with Trent Beretta and Rocky Romero reforming Rappongi Vice on several occasions, so this just continues the faction war — and allows the melding of these NJPW stables into AEW a little more. I think it would be a hell of a way to kick off the show, and reestablishing Andrade could be the boost he needs to push him into main event status.